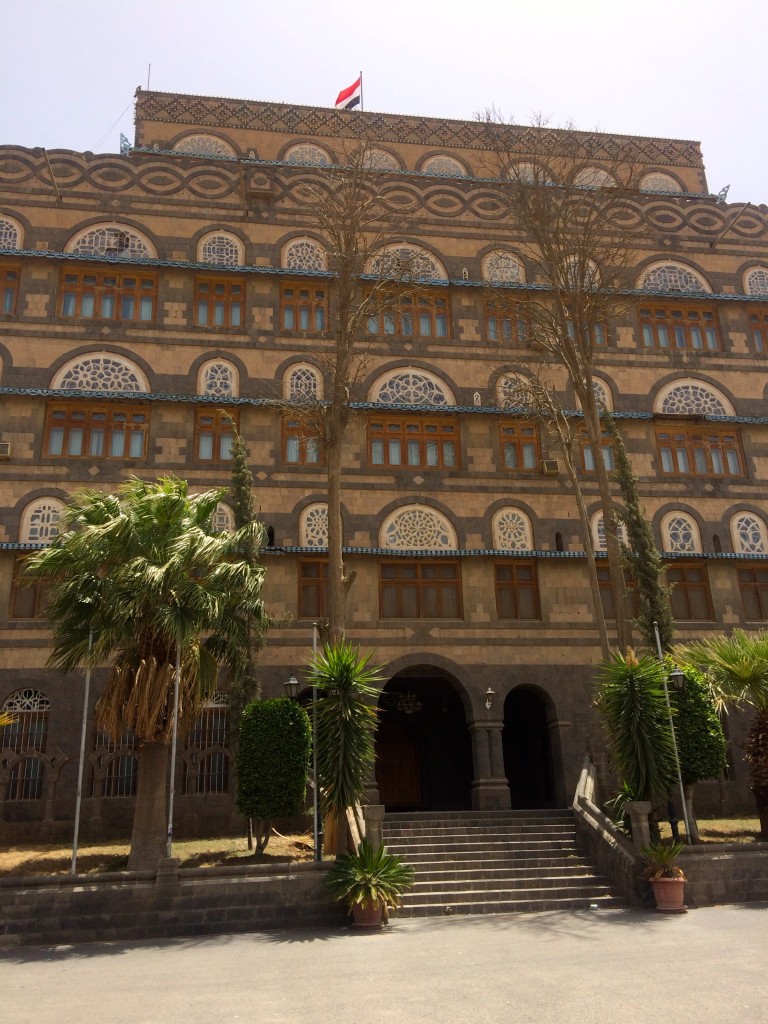 As we pulled up to the imposing and beautifully-built government palace, we could hear the faraway booms of Saudi bombs, and the very loud, very near crack-crack-crack of anti-aircraft fire. We were here to interview one of the new leaders of the Houthi rebels in Sana’a, and it suddenly felt like we were in a very obvious target. An untouched government building, now full of high-level Houthis? Hmm. We didn’t feel particularly safe.

Our CBS crew scurried into the building with our gear and did a quick interview with the head Houthi, wanting to leave as quickly as possible. As we packed up our equipment, another team of foreign journalists sat down for their interview, and we headed for the door. 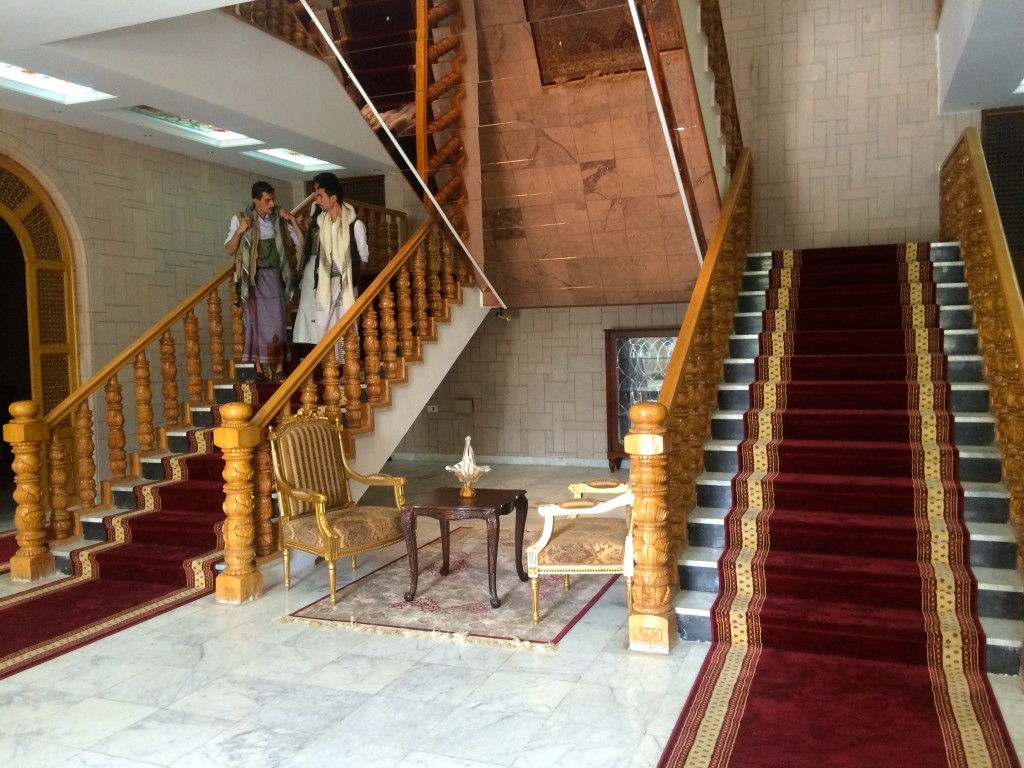 “Oh no you don’t,” said one of the Houthis, in a tan suit and black button-down shirt. “You must wait for that interview to finish. Because you must eat.”

“We don’t want to eat,” we explained. But apparently the head Houthi did.

“We appreciate the gesture,” we said. “But we feel like sitting ducks in a very obvious target, and we need to leave.”

“No,” said the man, with a curt shake of his head. “You’re not going anywhere until you eat.”

We pleaded, we cajoled, but he was unmoved… we had no other option. There were too many weapons in that lobby, and these guys exerted too much pull over the drivers. We were being forced to stay in this gilded bullseye, along with our colleagues, for a meal. 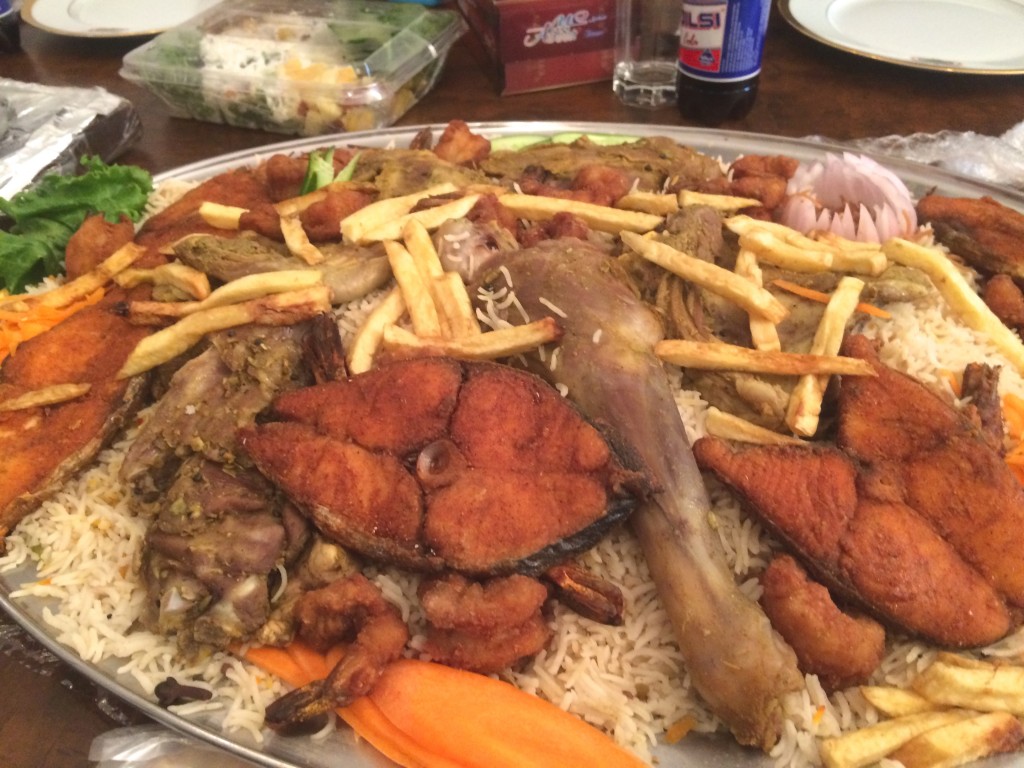 To be fair, they made it as pleasant as possible. Servers brought out giant platters of mandi: rice topped with slow cooked lamb legs,  shrimp, and salmon steaks. There were french fries strewn about, but perhaps that was for the benefit of the Westerners at the table.  Kind, smiling men dished out the food with pairs of spoons. 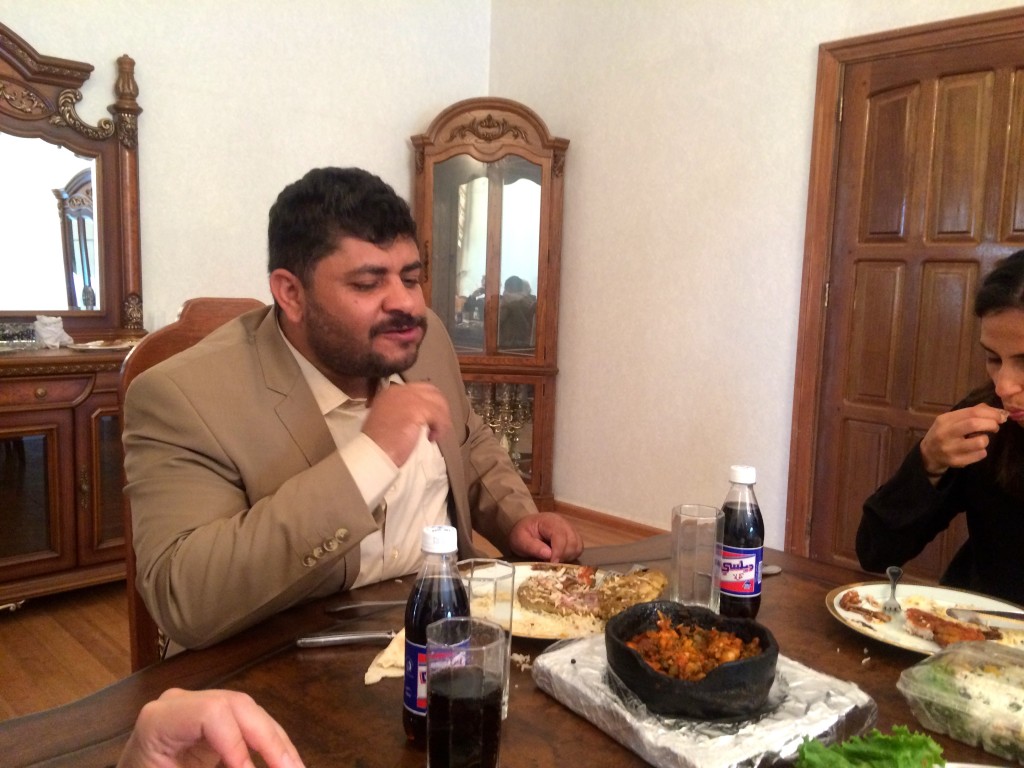 In Yemen, silverware is optional – many here eat with their hands. But I’ve never been very adroit at moving fistfuls of rice from my plate to my mouth without creating an epic mess.. so I stuck with a spoon. (The rebel leader seemed to have a tougher time with his flatware — bits of rice and meat and crumbs covered the table in front of him and at times his plate became such a mess the server would simply replace it with a new one, full of food.) 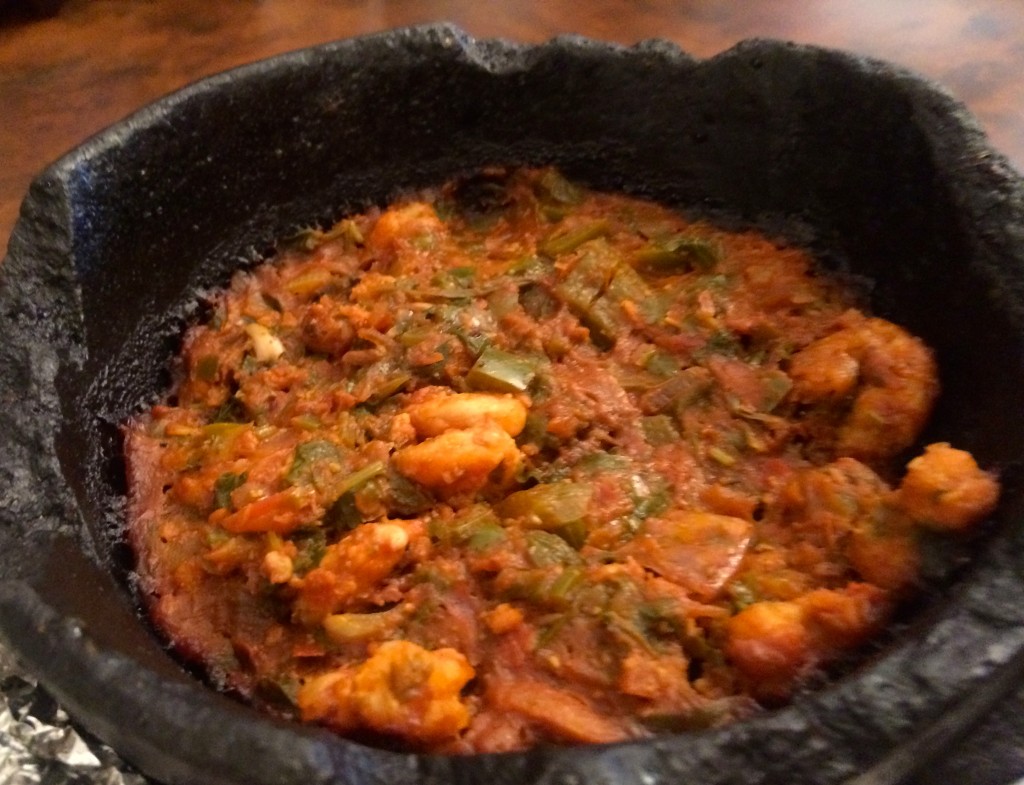 Next, hot clay pots were uncovered to reveal a spicy mixture of chilies, tomatoes, garlic, peppers and shrimp. This dish, saltah, is the national dish of Yemen and is thought to be over 1000 years old, originating in Sana’a. There was a great kick to it and it struck me as similar to Mexican — you could almost imagine eating it with tortillas instead of the requisite pita bread. I loved it. 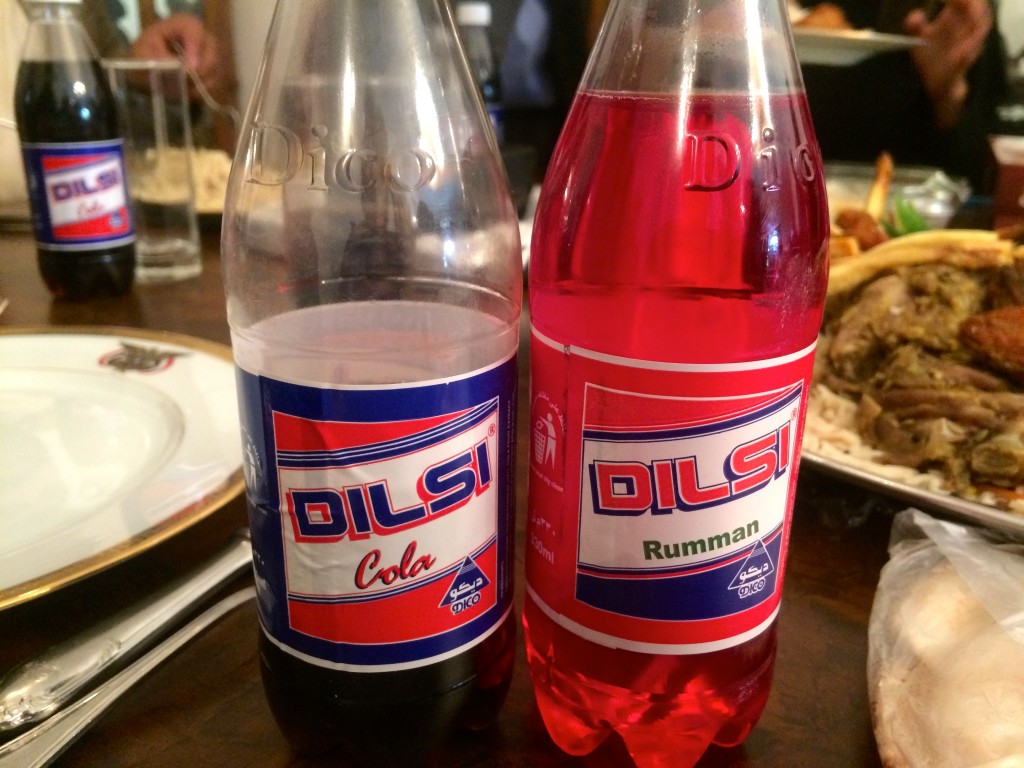 Also set out on our long wooden dining table were containers of salad topped with cut fruit and shredded cheese – which struck no one as particularly local nor wise, as a severe water-shortage in Yemen had us incredibly conscious of getting sick. To go with the meal, mango juice was poured, as were bottles of Dilsi cola and red soda.  Mmmm.. Dilsi. 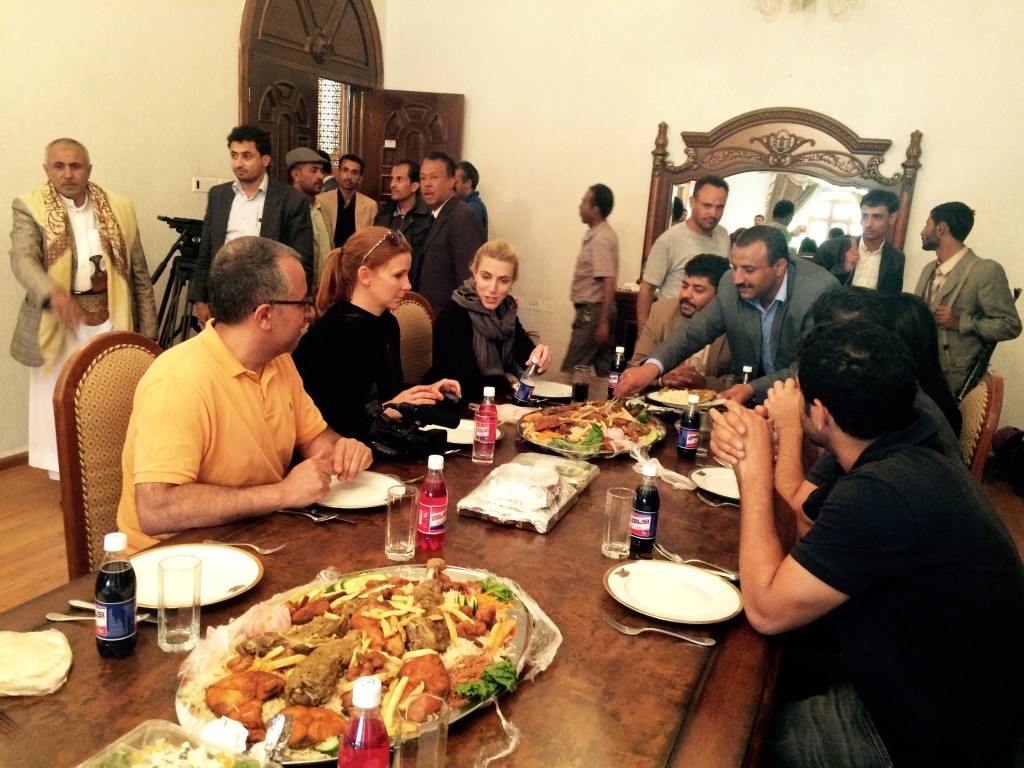 Five minutes after I’d been served I had polished off my plate, desperate to hit the road and get as far away from government buildings as possible. But the leader continued holding court, and the meal was to last as long as everyone was eating. I speared another shrimp and waited, my stomach cramping from the sudden deluge of inhaled food. 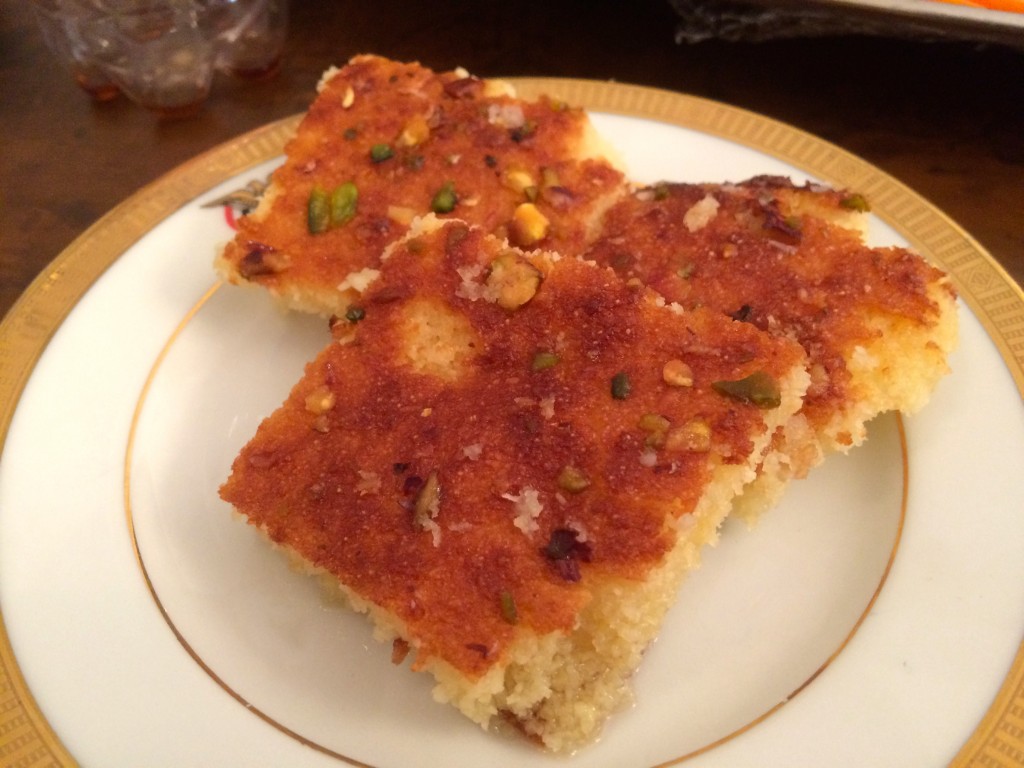 Finally, dessert was plopped down between diners: slices of basbousa, a semolina and shredded coconut cake soaked in a simple syrup and topped with pistachios. It’s not unique to Yemen — it can be found all over the Middle East and Turkey — but it was deliciously sweet and sticky and the perfect end to a stressful meal had under virtual gunpoint. Perfect because it was yummy, and perfect because it was the end.

With that… we left. And survived to tell the tale.

Street Snack in Yemen: Prickly Pears
An Iftar in Iran to Write Home About