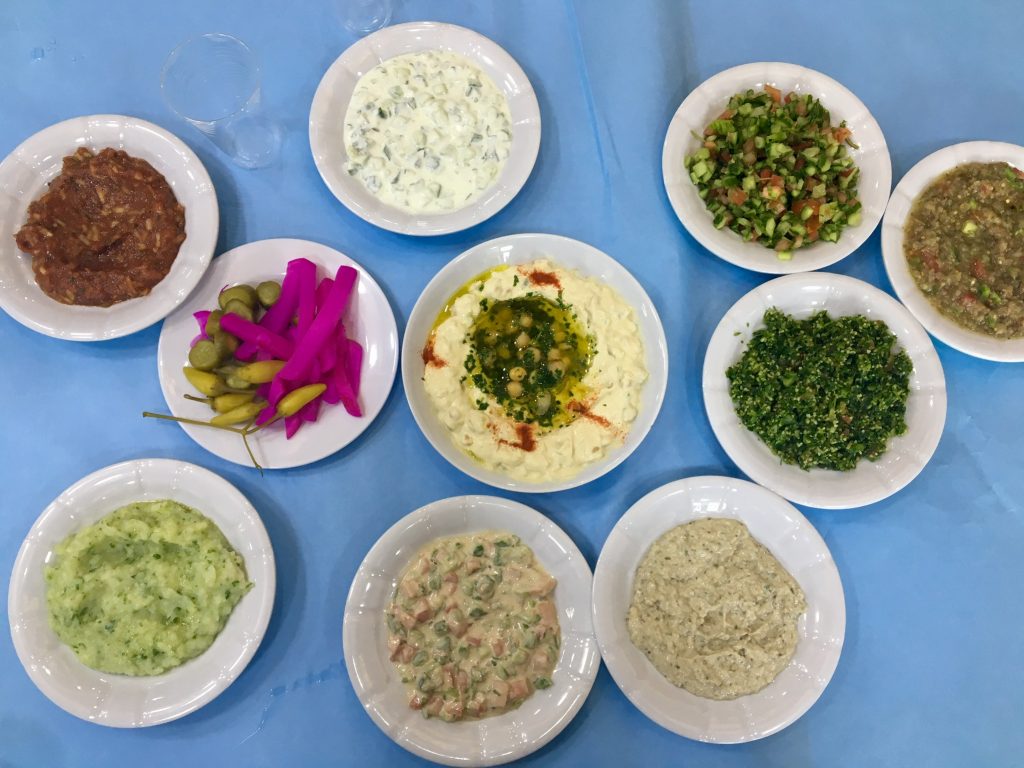 After a six month hiatus… Food Under Fire is back! In my time “off” I gave birth to a sweet baby girl, Mia; while it was certainly Parenting Under Fire, Sleeping Under Fire, and Diaper Changing Under Fire… I didn’t travel to any international foodie hotspots or warzone food carts, so this blog took a rest.

Now it’s back to work, and back on the road.

Today’s assignment took us to Ramallah, in the West Bank, where after a morning of hard work in a health clinic we were craving some Palestinian specialties. Well. Not all of us were craving all of the specialities. 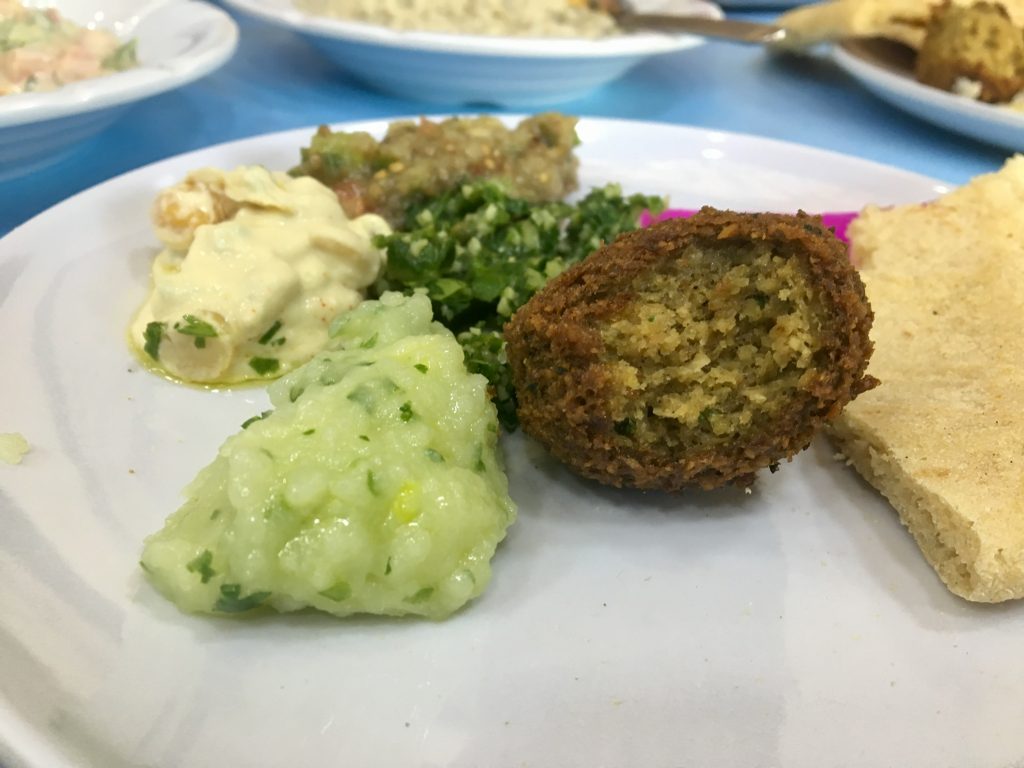 At Samer Restaurant (motto: “Always Fresh and the Best! Premium Quality”) we ordered the greatest hits. Within the succession of mezze slung on our table were some of the best falafel I’ve ever had. The secret ingredient? Allspice. I normally find falafel fairly dry and uninteresting, but these were exceptional, with a crunchy exterior, a light chickpea interior laced with parsley, and the unexpected taste of clove and nutmeg. 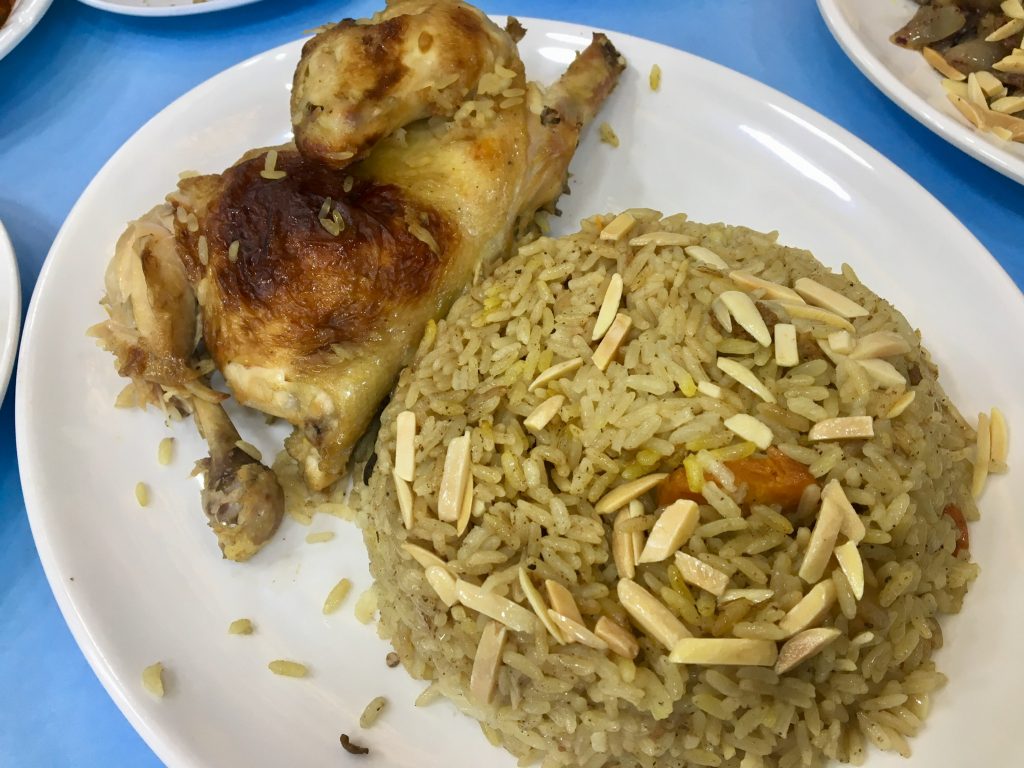 Two local chicken dishes arrived next: musakhan and maqlobeh. Maqlobeh, which translates to “upside down”, wasn’t served in the traditional way — normally, it resembles a large cake made of rice & spices, under which lies a chicken. Here, they cheated a bit, serving rice mounded into a cake-like shape, next to a well seasoned bird. It was good – but not great. 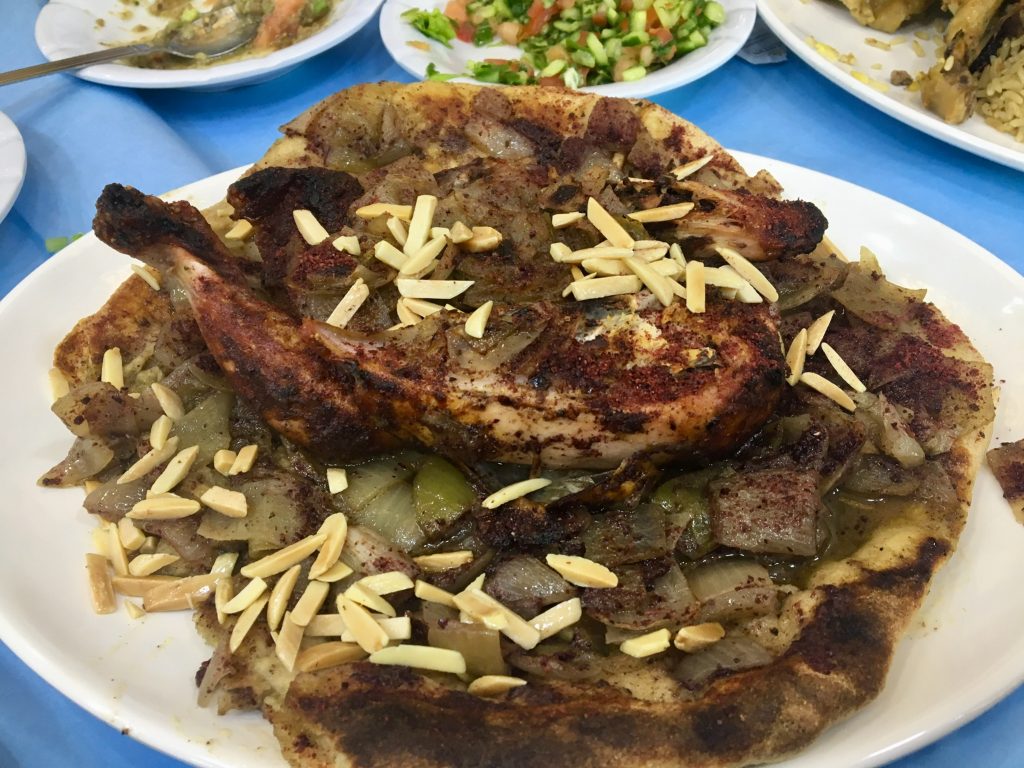 The musakhan, however, was delicious, and a nice aberration from the typical rice-meat combo found in this region. (The dish is usually prepared during olive-pressing season as it depends on the availability of good olive oil.) A chicken, generously rubbed with oil, cardamom and sumac powder (which tastes as bright and tangy as lemon juice) is roasted with piles of onions atop flatbread until the onions are sweet and carmelized, the juices have soaked through the bread, and the chicken is brown and glistening. It was sweet and sour, crisp and floppy… and just fantastic. 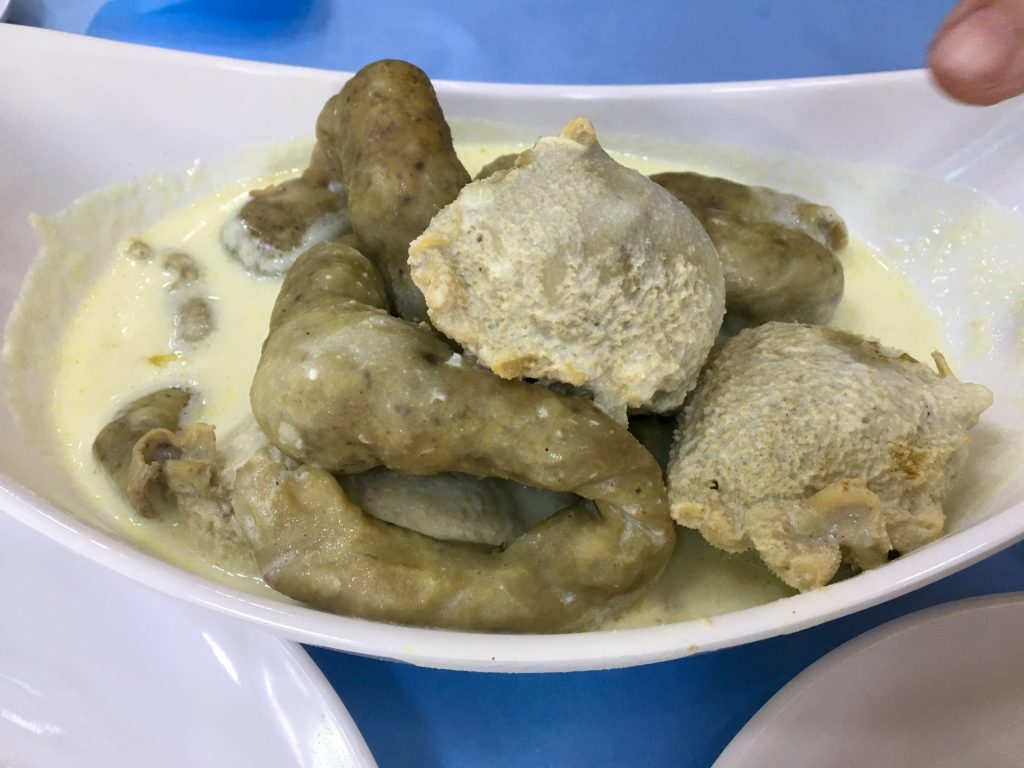 Our final deep-dive into the world of Palestinian gastronomy? Ghammeh. Densely packed stomachs and intestines (usually goat or sheep), full of cinnamon-scented rice, meat and nuts, served in a thin lemony yogurt sauce. Did I try them? Yes. I was pleasantly surprised by the stomach and intestinal textures… they were thinner than they looked, with less chew than a sausage casing and no taste to them. The rice was lovely, warm and with that same wintery comforting spice as the falafel. 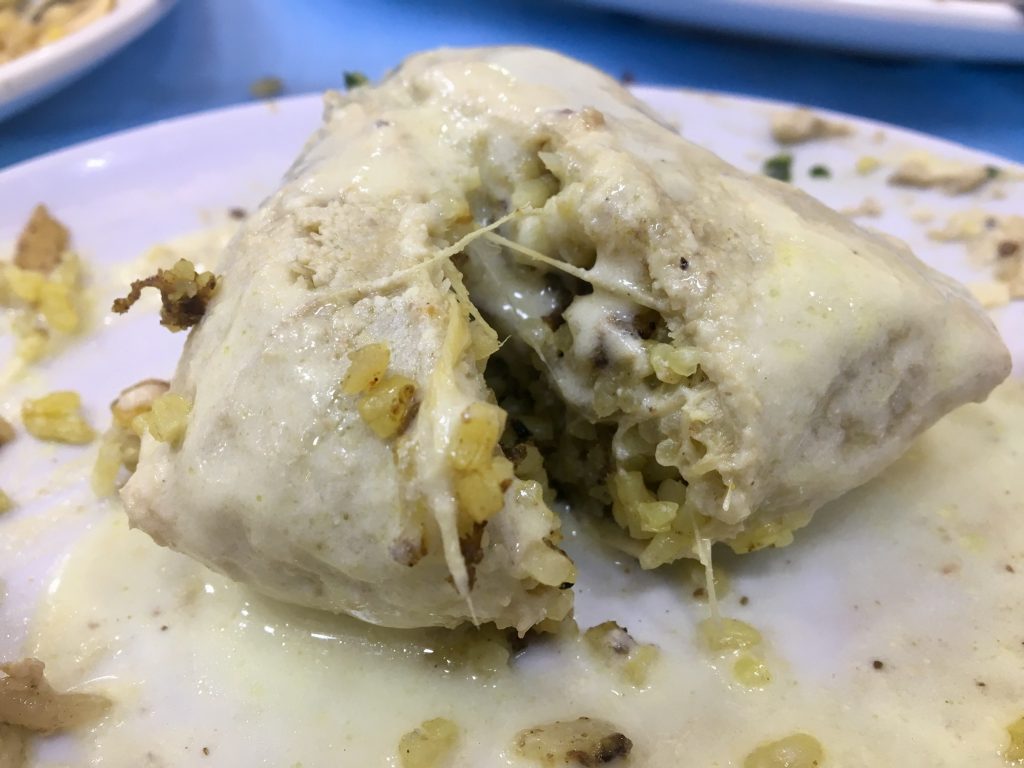 Did I want to eat more than a bite of each? Not really. Our coworker handily polished off most of the digestive tract of a medium-sized farm animal, but the rest of us just picked at our plates. It is, after all, my first blog back… ’tis better to ease into offal! 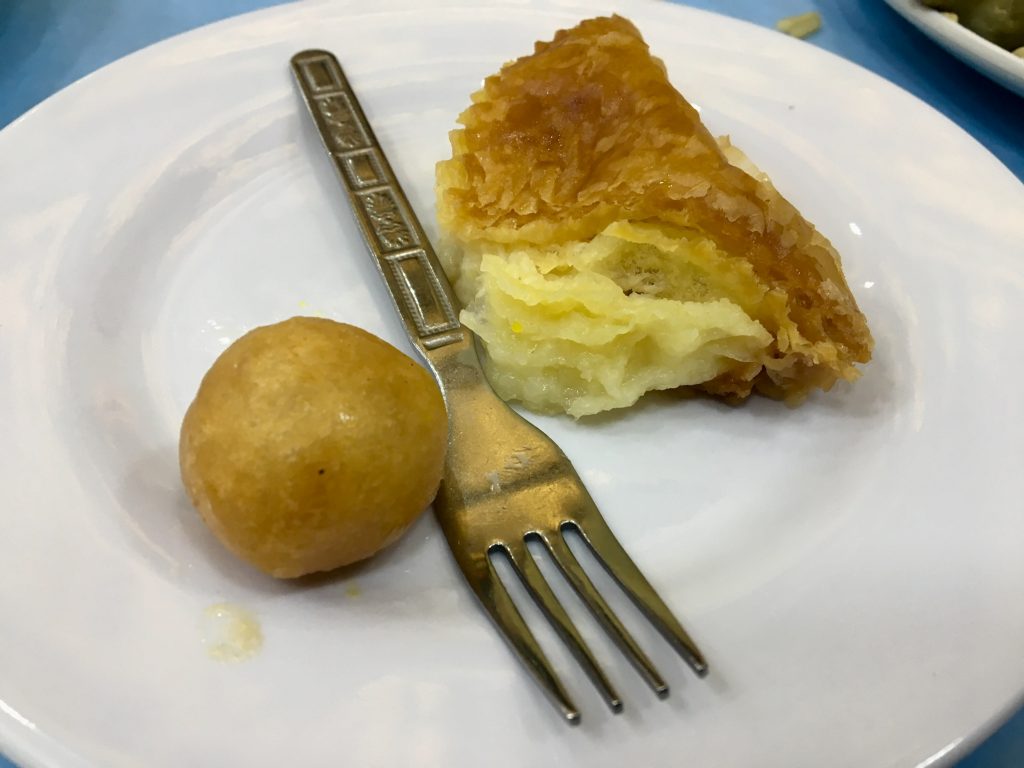 Good thing they gave us a complimentary plate of dessert that oozed with tooth-achingly sweet honey and rosewater. If one has to brave the West Bank traffic back to Jerusalem, better not make stomach the last thing on your palate.

Forshmak, Korushka, and Other Specialties in St. Petersburg
Farming Under Fire in Gaza

3 Responses to Stuffed Stomach in the West Bank… Literally