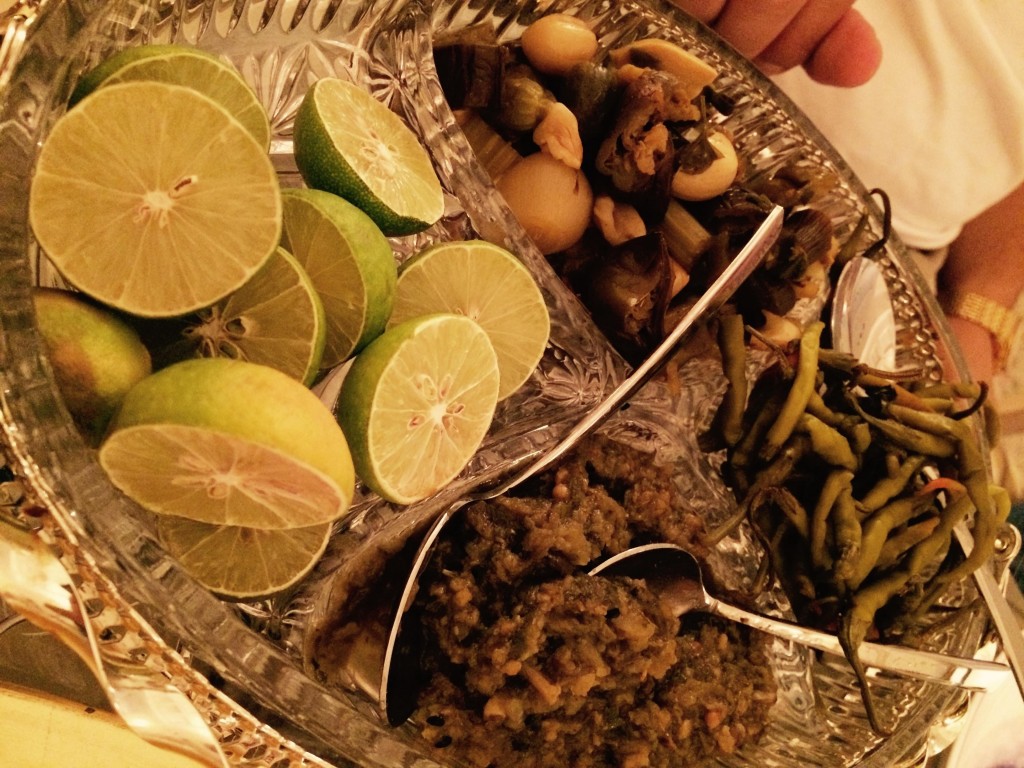 There are only a small handful of advantages to coming to Iran during Ramadan, but there are 2 that really make it worthwhile:  First, the notoriously insane 17-21 hour Tehran rush-hour dissipates into thin air and daylight becomes a blessedly calm time to navigate the city, as most people work half-days and are too exhausted to move, choosing instead to flop around, counting down the minutes to Iftar.

The second is, you guessed it: Iftar, (ie: breaking fast), with Iranian food. This time around, not only was I looking forward to guzzling some of my favorite dishes, there was also the added excitement of watching (on TV) the second game of Iran vs USA in the volleyball World Series, played in Tehran.

This may sound a little dull to most, but Iran (serious underdog) somehow managed to beat the USA 3-0 during the first game and half the country was on their toes, hoping for a second win. (Keep reading ’til the end…you might even find out what happened….) 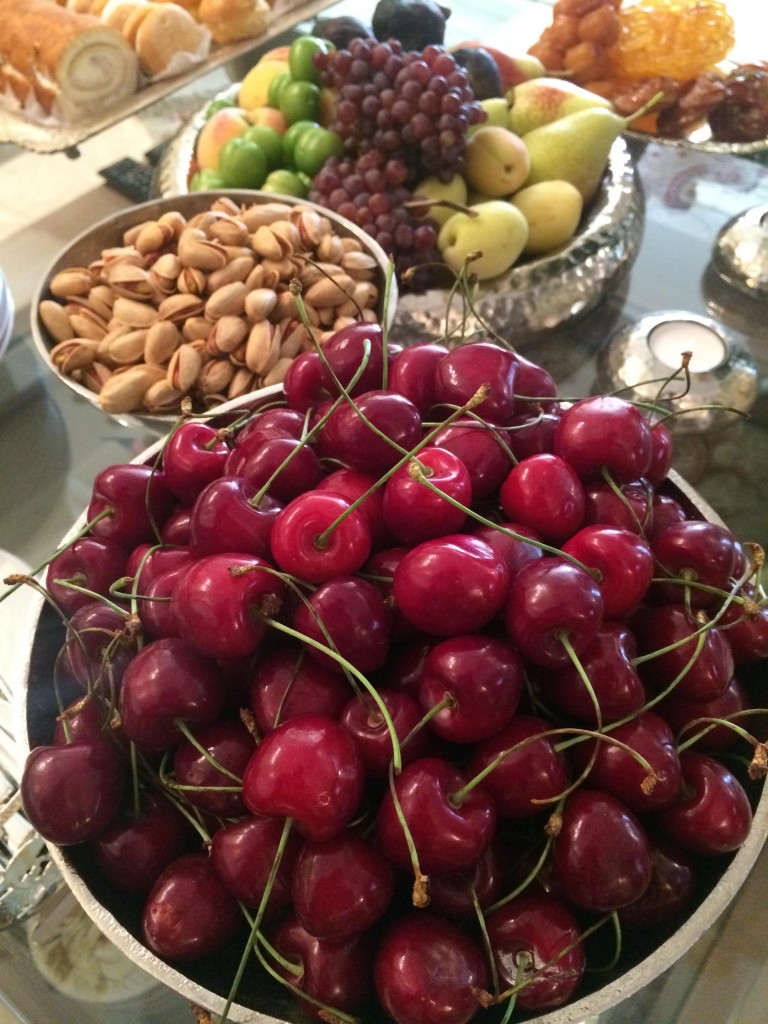 On this specific occasion, I was invited to dinner by a couple of friends at their house in the Northern suburbs of Tehran and I knew I was in for a treat, as my friend’s wife is an excellent cook and the perfect host. Just as the sun stared setting and the first call to prayer could be heard across the city (as well as a combined sigh of relief from the 20-odd million inhabitants), we start tucking in. Up first, the sugar rush, to kick the body back into action: a beautiful spread of sweets (zoolbia & bamieh), succulent Iranian cherries, nuts and assorted fruits, accompanied by tea. Nothing like dessert before dinner! 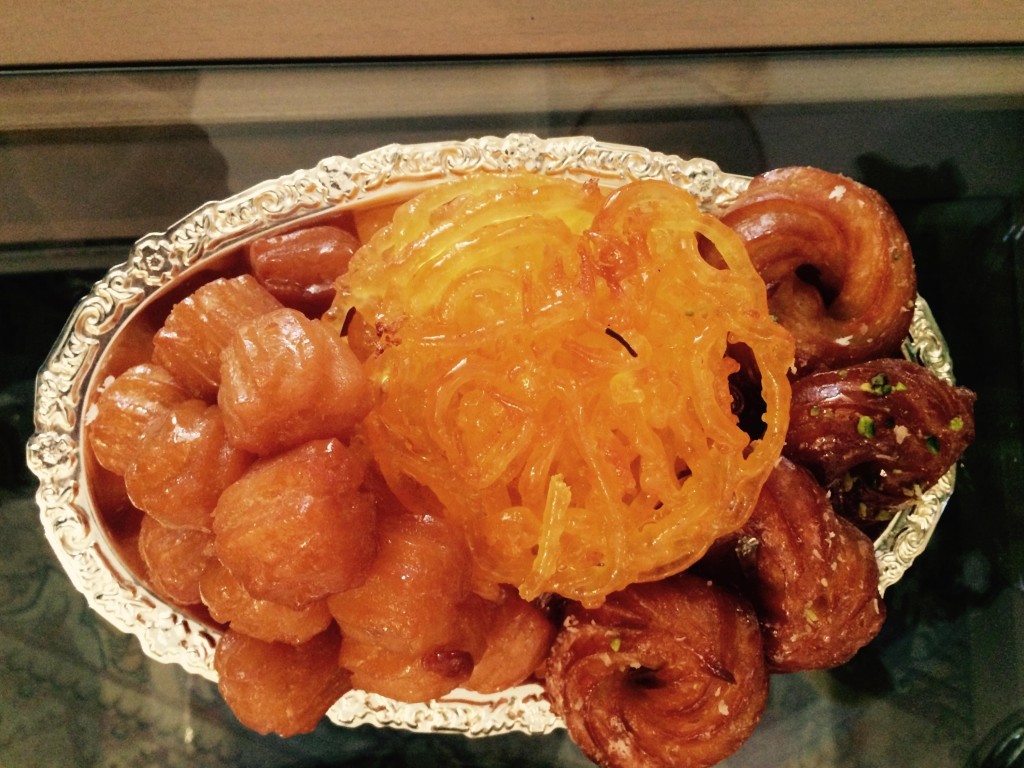 Knowing well the feast that was to come, I forced myself to resist that first wave of frenzied gobbling and only popped a few cherries in my mouth, slowly sipping my tea and watching the sun set behind the mountains.

A few other friends trickled in, 8 of us in total, and when the 9pm volleyball game started, all conversation came to a grinding halt. There is great respect for the US team, as they were the previous year’s World Series champions, but there was an obvious excitement in the air at the prospect that Iran could come out on top, having won the first game two days ago. The day before, the Iranian team had taken the US guys sightseeing around Tehran, and wherever they went people gave them red roses and cheered them. But tonight, they meant business!

A few sneaky cold beers soon replaced tea and coffee, as we settled down for dinner.

(Fun fact: Iran is a totally DRY country, so any alcoholic beverage has to be bought on the black market  – the going rate for a case of 24 Heinekens? $200. You do the math. When you drink, you make it last.) 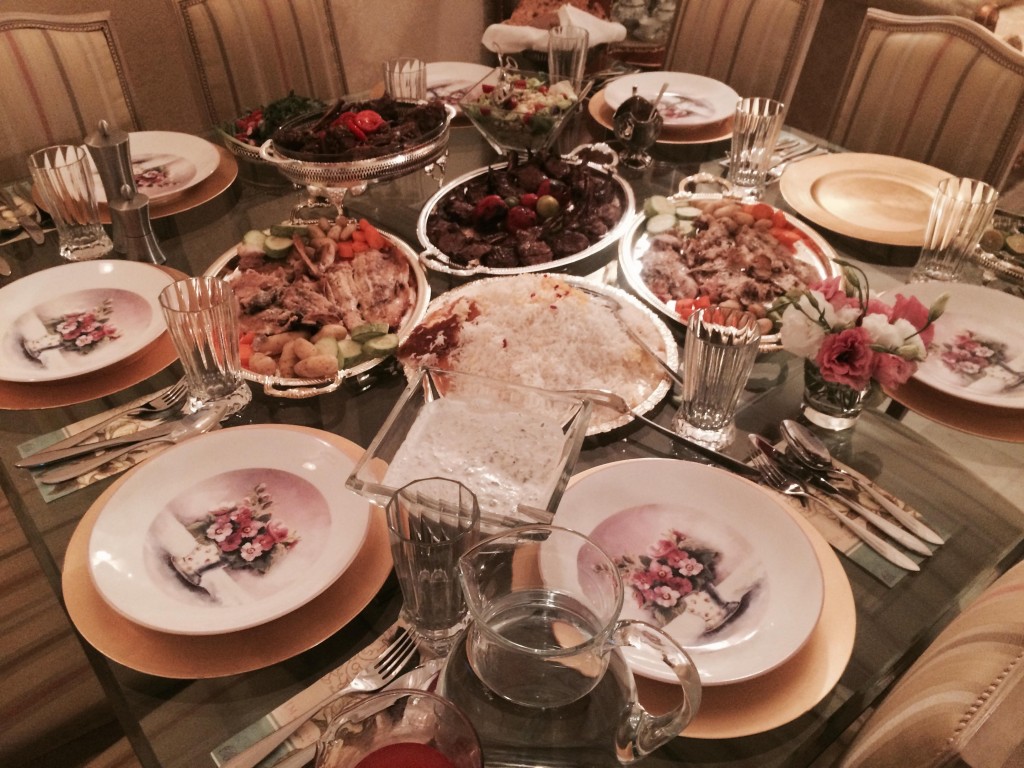 If the spread for appetizers looked already like enough to feed a small army, with the amount of food we had waiting for us at the dinner table I believe we could have kept Napoleon’s troops happy throughout their entire winter campaign in Russia…(and maybe that would have been a good thing, come to think of it…) 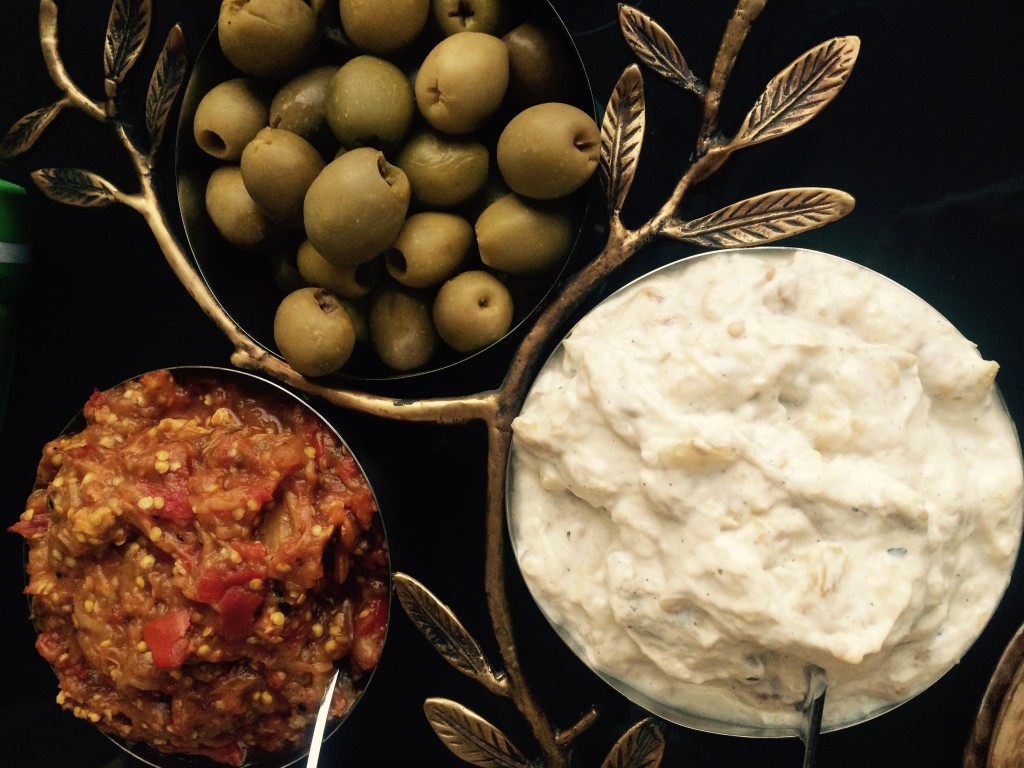 Anyway, I digress. Back to the yummy stuff; Bowls of Mirza Ghasemi (soft-roasted aubergine in tomato sauce and garlic, with eggs stirred in at the last moments of cooking) and Borani Bademjan (an eggplant/yogurt dip) to spread on warm bread; fresh yogurt with herbs and rose petals (mast o khiar) to accompany succulent little lamb chops (shishlik).

Out of the oven and promptly paraded to the table, a tender and wonderfully cooked trout (ghezelala), flavored with garlic and spices. 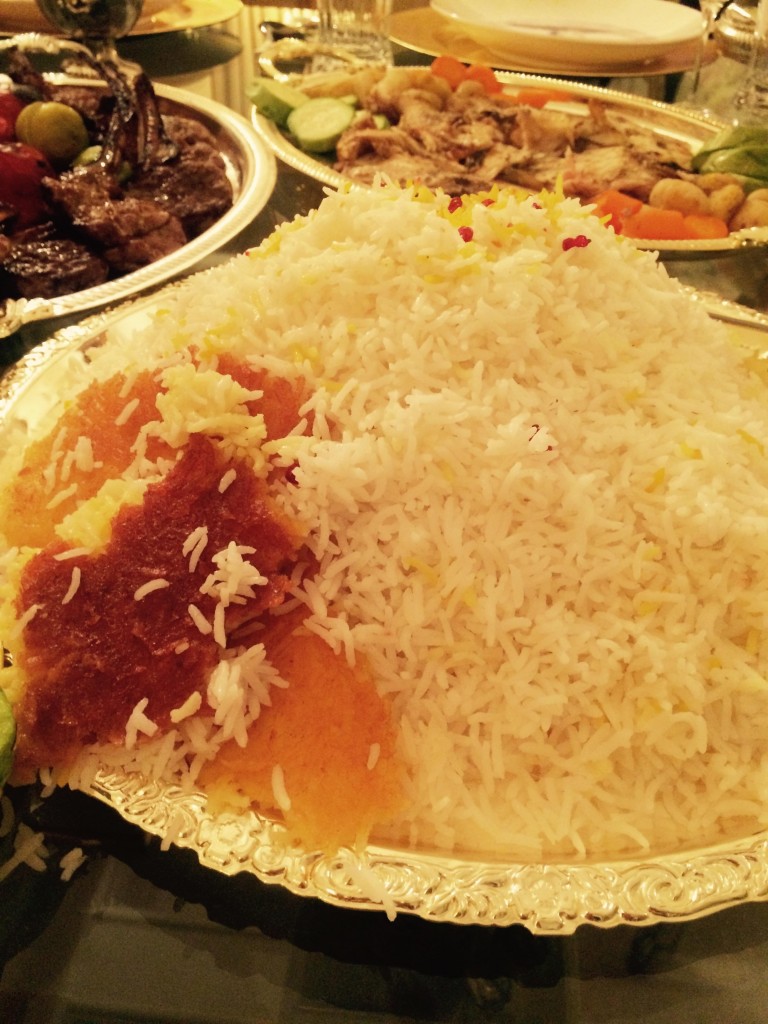 A wonderful assortment of liteh (pickles, prepared by grandma) filled another bowl. And then rice: not just any rice – Iranian rice, with its crunchy and oh so delicious tahdig (aka, rice crust) – a MUST have, on any Iranian dinner table. It’s the fried bits of congealed rice from the bottom of the pot – and it means, literally, “bottom of the pot” – and is traditionally offered to guests.

But the true king of the table, in my humble opinion, had to be the mahicheh.

In layman terms, it is a lamb shank with onions…. In reality, a dish that delivers rich, succulent, juicy, hearty mouthfuls every forkful you take, and really encompasses perfectly the complexity of Iranian cuisine. 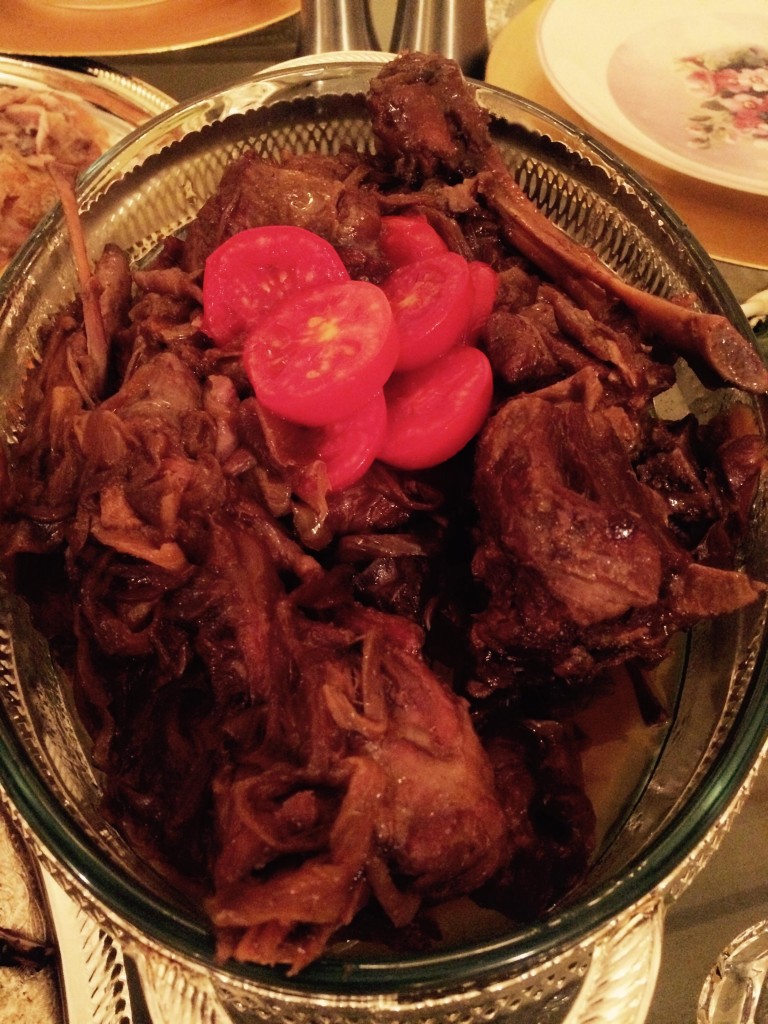 This is not some dish than can just be prepared at home. The one sitting on our table came straight from the furnaces of one of the best restaurants in Tehran, Shandiz (the one in Jordan district). The restaurant actually cooks as many as thirty shanks at the same time, in these giant clay pots, on an open fire. The dish requires a minimum cooking time of about 10 hours; Onions, spices and oil are cooked separately and then added to the lamb towards the end, so that all the flavors blend together. Personally, my favorite way of eating it is to use small chunks of barbari (Persian flatbread) to gently pull off the succulent chunks of meat and to deposit them as elegantly as possible in my very open and very willing mouth. And then repeat. And repeat, and repeat, and repeat. Burp. 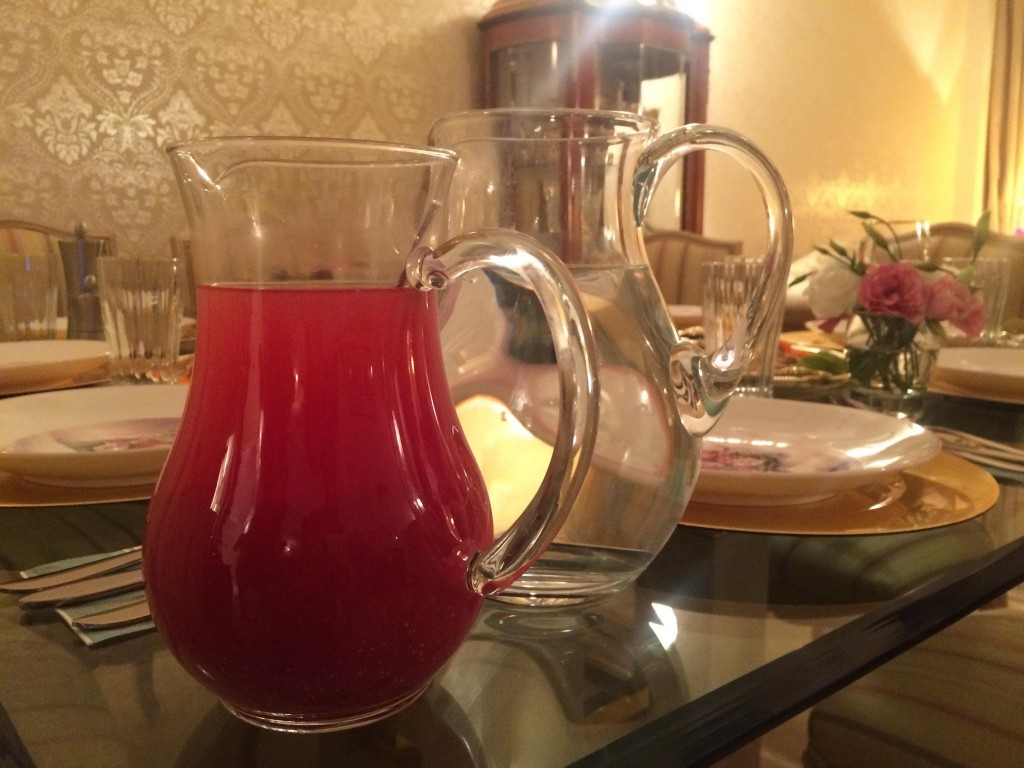 The one source of hydration throughout the meal worth mentioning was probably hendevaneh, a refreshing watermelon juice that is commonly served during lavish meals like this one.

And so the evening carried on, with us boys alternating mouthfuls of great food and craning our necks to follow the game (muted) and the ladies catching up on local gossip and chatting about yoga and what not. Finally the hour came for me to leave for the airport, so I bid farewell to my friends and off I went into the night…only to bump into the US Volleyball team in the lounge of Imam Khomeini Airport…and take two minutes to console them for their second loss (3-0!) to the Iranian team and collect a few autographs to give my friends next time I visited. Happy Iftar, everyone!

Oliver Sanna is an Aussie-Italian spending most of his time in London but occasionally jetting off to dangerous places in search of the finest leather money can buy. Or, he’s a spy. You’ll never know…

View all posts by Oliver Sanna →

A Forced Lunch with a Rebel Force
Food Under Financial Fire: Eatin’ in Athens