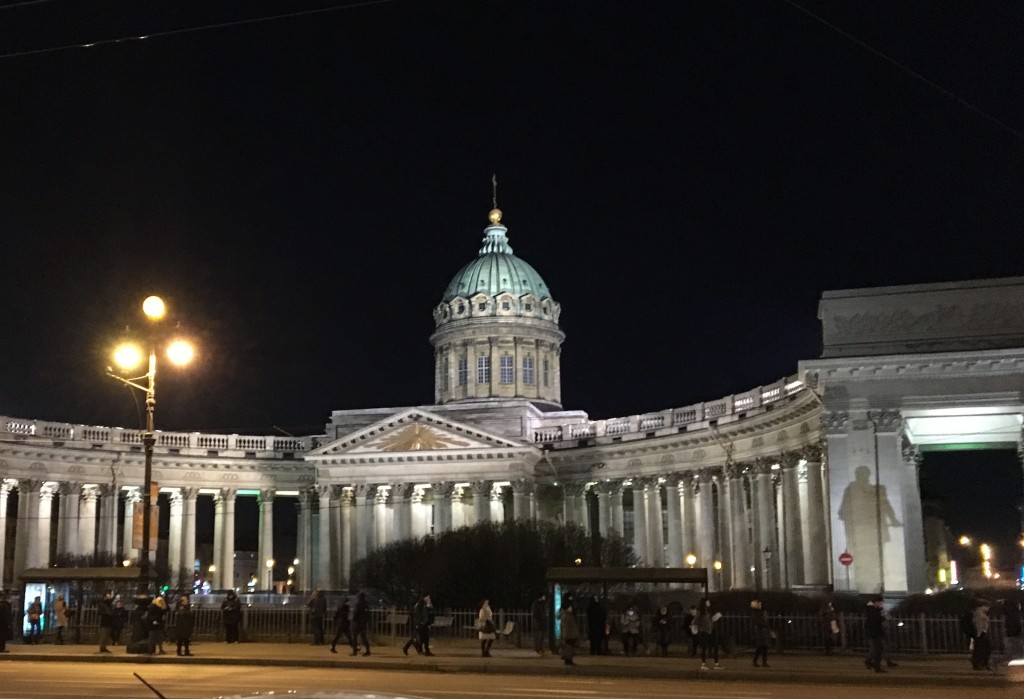 The greatest risk, when in search of a Russian meal, is of stumbling into a restaurant of gut-bombs: platters of cream-drenched chicken, iron crocks of cheese-laden something or other, hunks of greasy meat and bowls of doughy dumplings that turn into glue as soon as you digest them. The struggle is real.

Which is why it was such a pleasure to emerge from a meal at Katyusha Restaurant, in the shadow of the Kazan Cathedral, feeling warm, sated, and light. Standing on the cliff of fullness, without tipping over the edge. 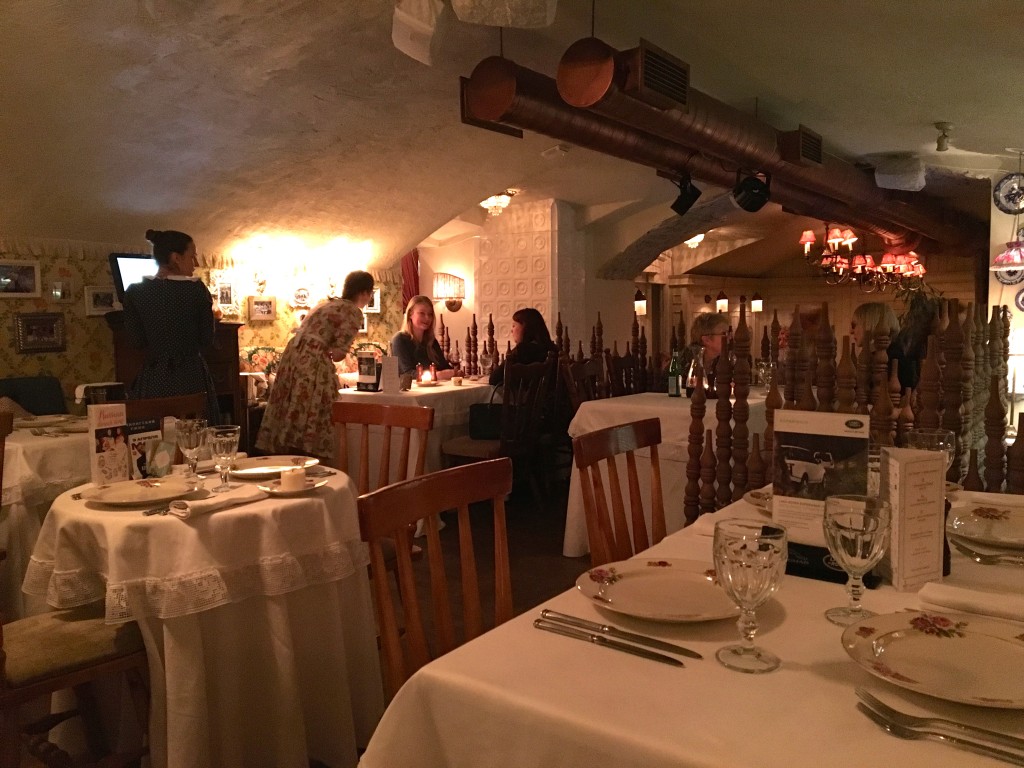 The restaurant, like many in the city, is located underground, with the frilly décor of a British tearoom. Waitresses are bedecked in demure flowered dresses (high neck, mid-calf length), there are blue porcelain plates on the walls, and the tables are laid with candles and draped in doilies. Despite the femininity, you can eat like a man here – they do have meaty standbys like beef stroganoff, pork shashlik, and Chicken Kiev – but they take a light hand to their fish dishes, some of the best versions I’ve tasted. 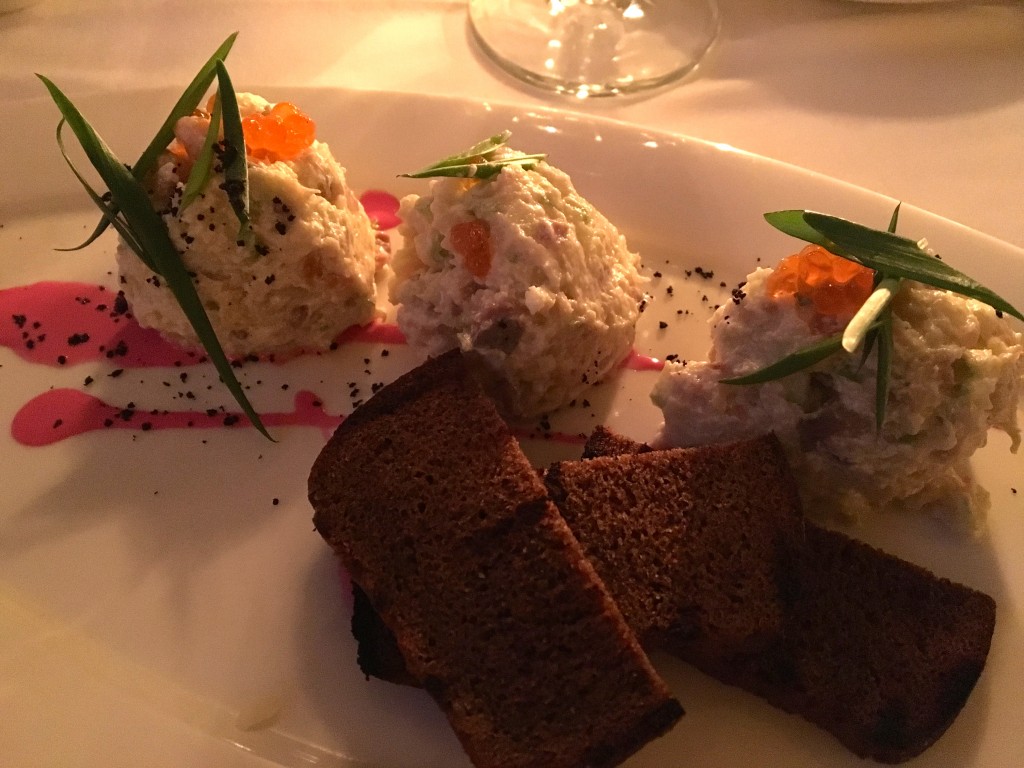 To start I ordered the forshmak, a salad of chopped herring, potato and apple, served on toasted brown bread. It looked as dense as egg salad but had a whipped airiness, with the sour crunch of cubed green apple adding a lovely texture to each bite. 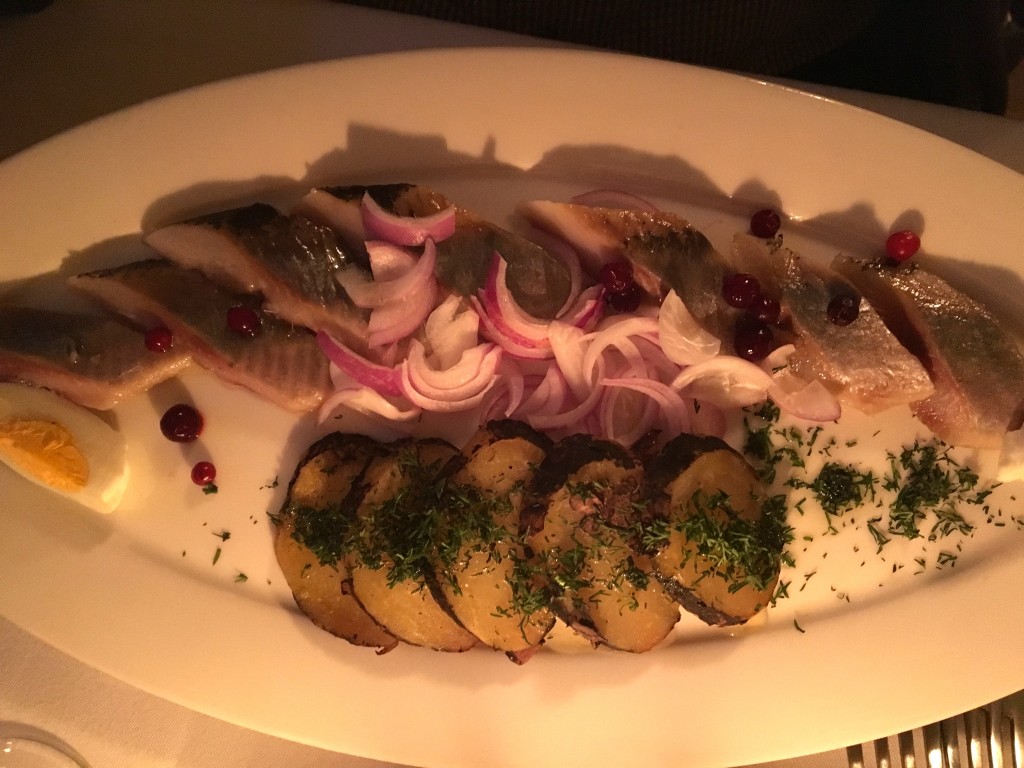 A simple dish of marinated herring with sliced potato was equally satisfying, with no oiliness and a pleasant pickle tang to the fish. Salmon tartar, cod filet, zucchini pancakes, soups and a selection of caviar were also on offer as appetizers. 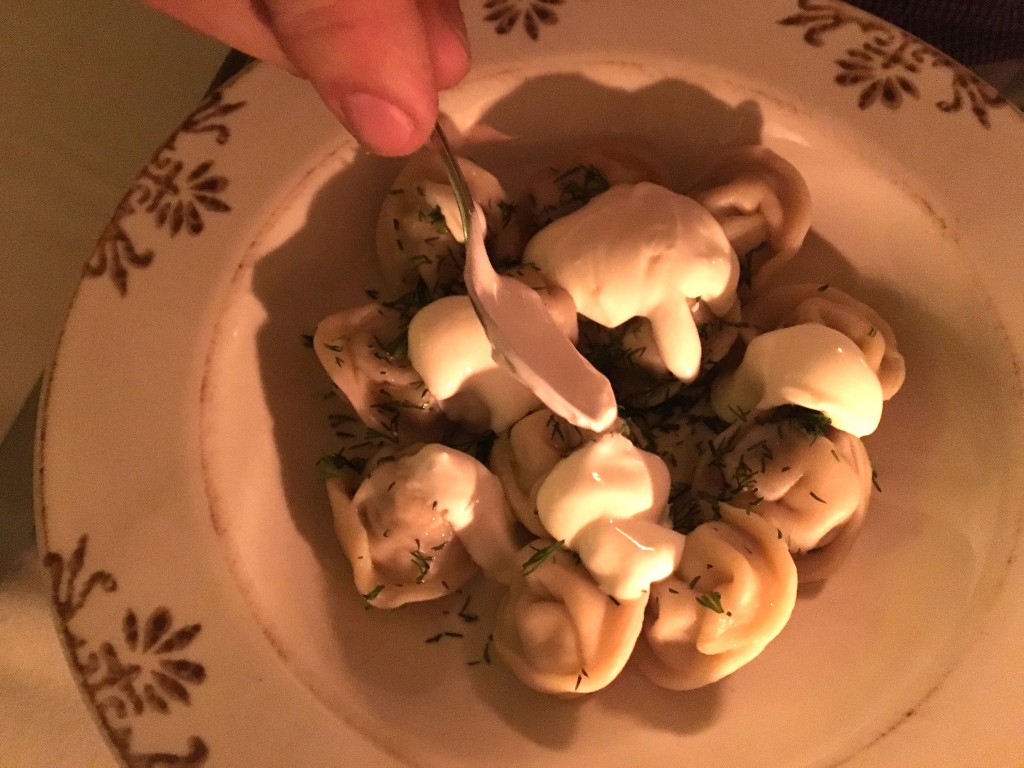 In addition to the meaty and traditional mains (like elk roast with stewed pumpkin or veal & pork cutlets with pickles) were two pages of various pelmeni: Russian dumplings stuffed with meat, vegetables or fruit. At Katyresha the dough was pliable and pleasingly chewy, stuffed to bursting. Meat pelmeni were served with soured cream; dumplings filled with chopped arctic fish were topped with a smattering of boiled egg and bathed in light lemon butter. As comforting as a porcelain bowl of hugs. 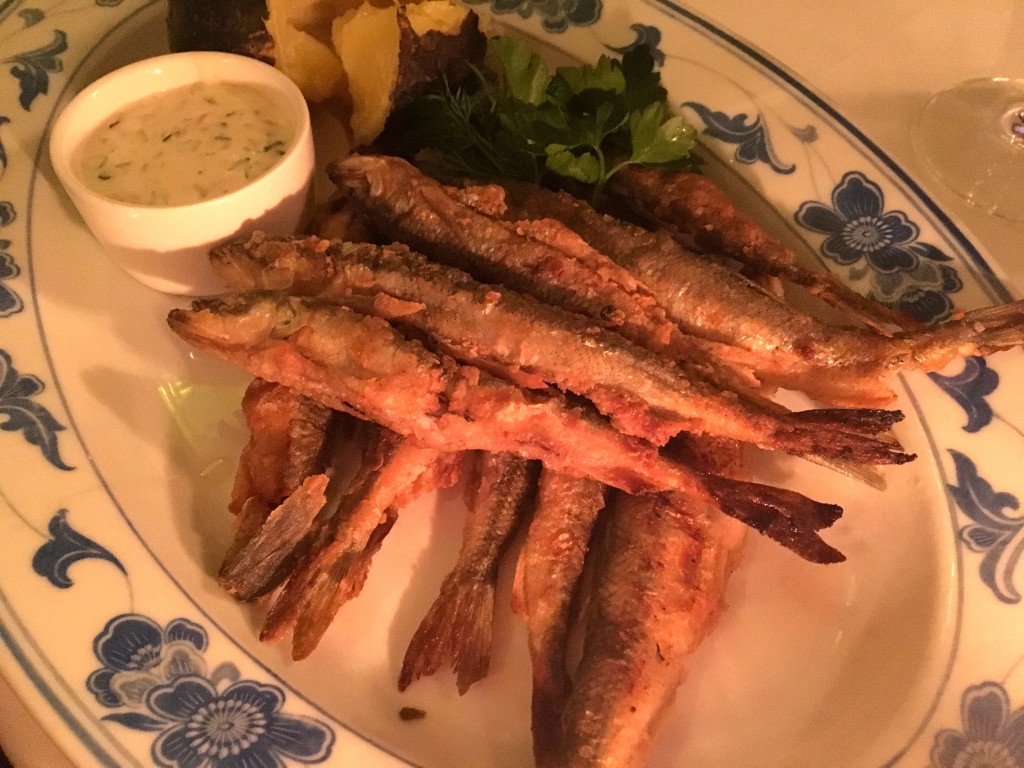 We also ordered the seasonal special: lightly battered and fried smelt called korushka. Slightly larger than sardines, and without the fishiness, a heaping pile was served steaming with tartar sauce and a boiled potato. Should they be in season – these are a must-order. 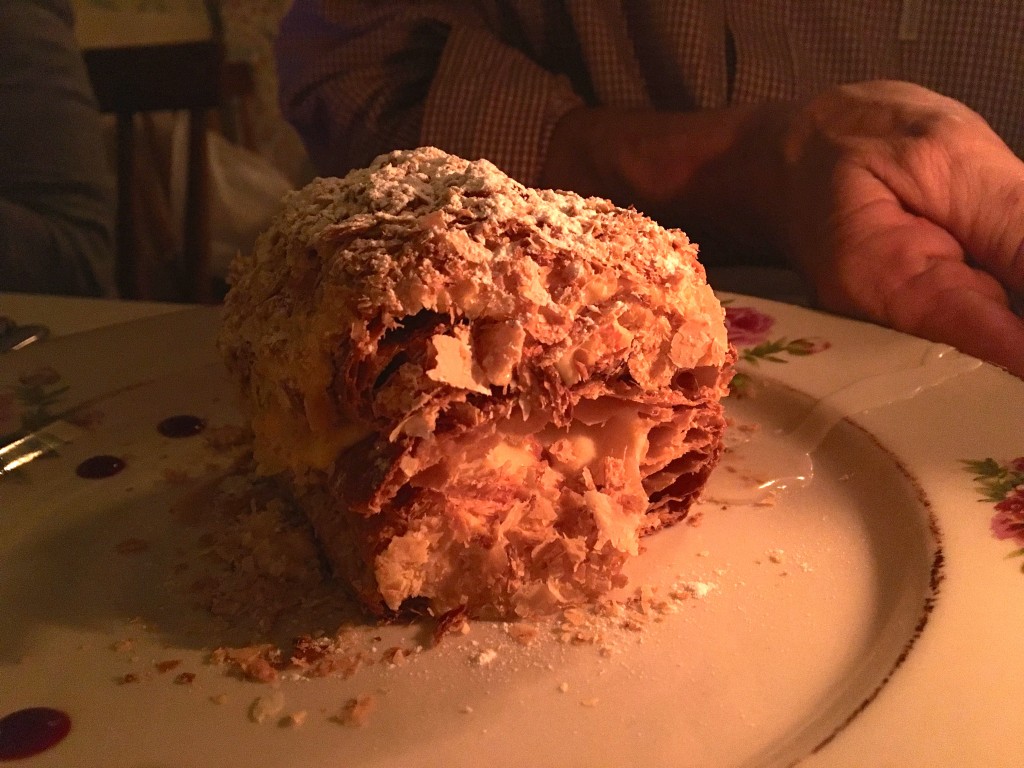 Although we could have walked away happy at that point, the dessert menu was just… too… tempting. At the waitress’s recommendation we ordered a napoleon, an imposing structure of flaky pastry, cream and pear that shattered and disappeared without us even noticing. They also had a great list of local ice cream flavors: rye bread, buckthorn with local honey and flax, praline, cherry. Mmm… ice cream. 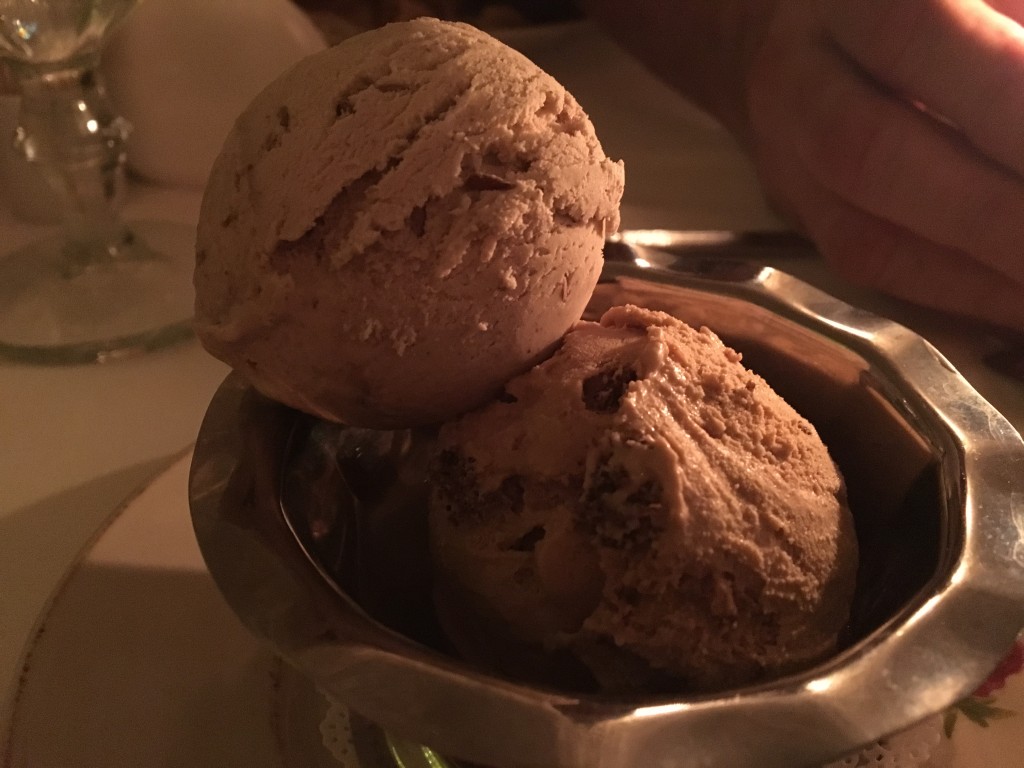 After dinner it’s a lovely area to stroll around; one of the most impressive features of St. Petersburg is the dramatic lighting of the buildings at night. It’s transporting in that movie-set kind of way, making the city seem full of romance and intrigue. And after dinner at Katyusha, you’ll still be light enough on your feet to enjoy it.