By Scott Munro on December 20, 2015 in Uncategorized 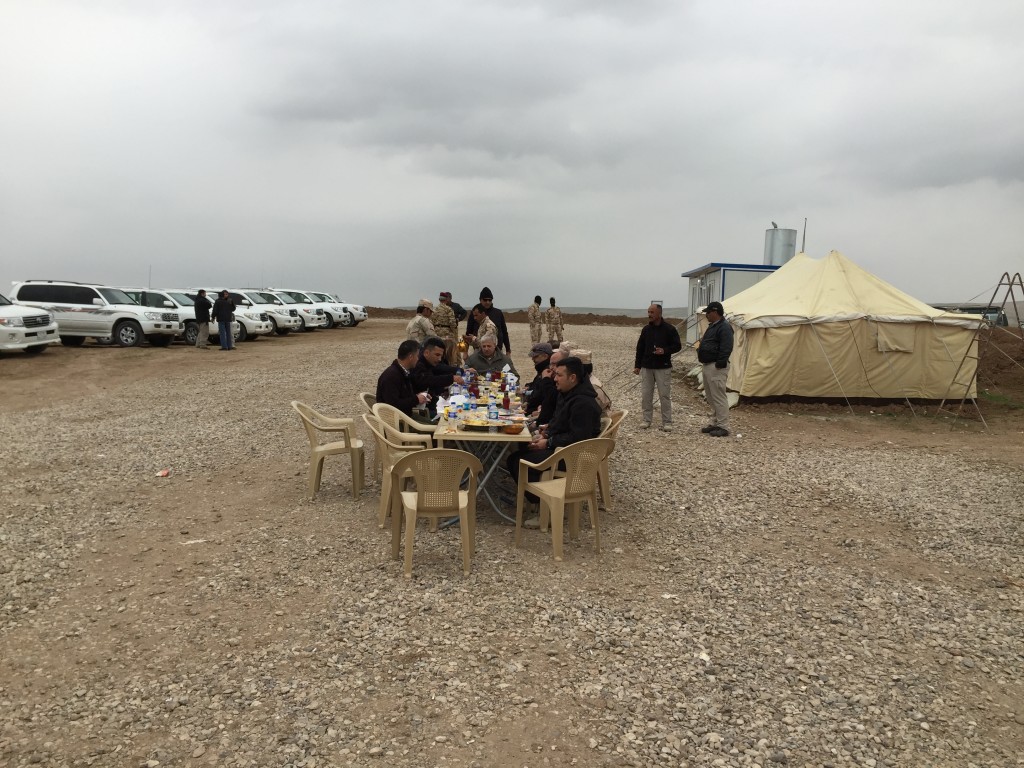 “Sit, sit, eat.  No more photos!” When men with in uniforms tell you things, it’s generally wise to do them.  Being ordered to lay down my heavy television camera for lunch was an order I was more than happy to comply with.

Along potted, rutted and congested roads, we traveled 2 hours northwest of Erbil, in Northern Iraq, deep into the Nineveh plains.  It’s an ancient area northeast of Mosul where the first Christians in Iraq settled about 1600 years ago, building communities, churches and monasteries.

Our crew traveled here to film a large group of volunteers and refugees who joined the Iraqi Army and are now training to fight, retake and hold the town of Mosul which is currently occupied and fortified by fighters of the Islamic State. 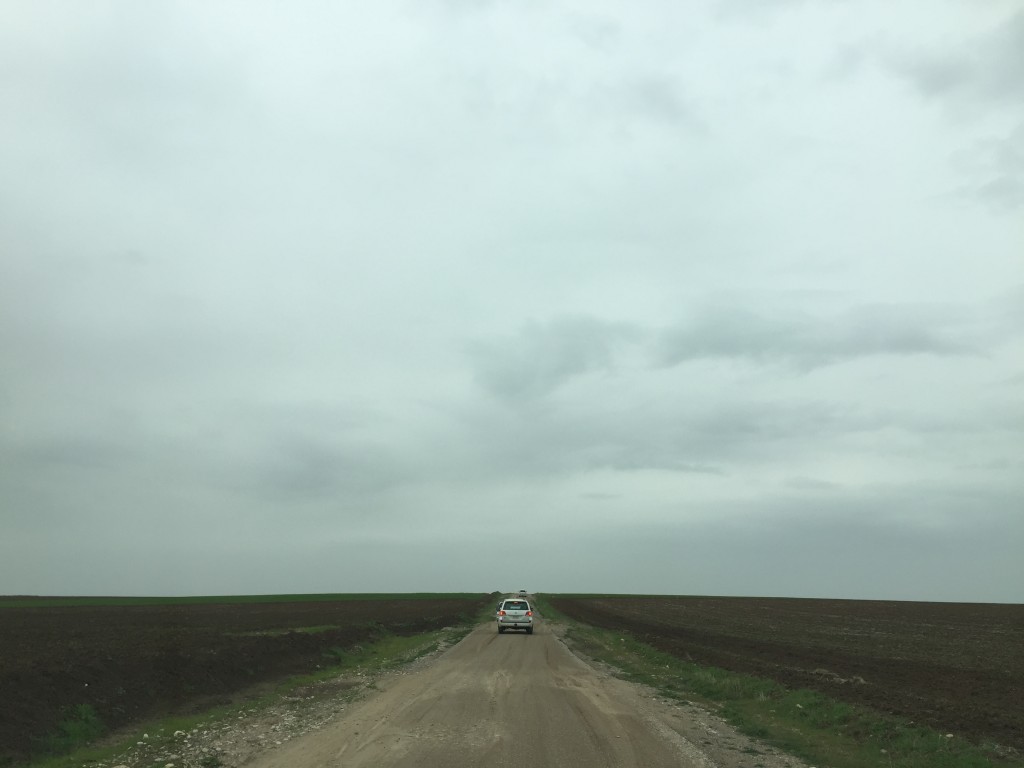 On these ancient plains, and under a brooding leaden sky, we shot drills, an assembly, and a practice building raid… when that was completed, a long table was quickly assembled, and surrounded with plastic chairs.

Some members of the crew, who shall remain nameless, skipped lunch today in favour of pre-bought snacks.  My impressions of clucking chickens was not enough to convince them that this was a meal worth risking Gastroenteritis for.

The more culinary courageous of us stood beside the chairs and waiting for the invitation to sit, after the Governor. As the Governor of Mosul in-exile, Atheel al-Nujaifi sat, the plastic table quickly filled with the Army Generals and Commanders, served by their recruits.  This is a newly constructed army training base, and is still under construction. The cook house is a shipping container, and the mess hall is air conditioned. 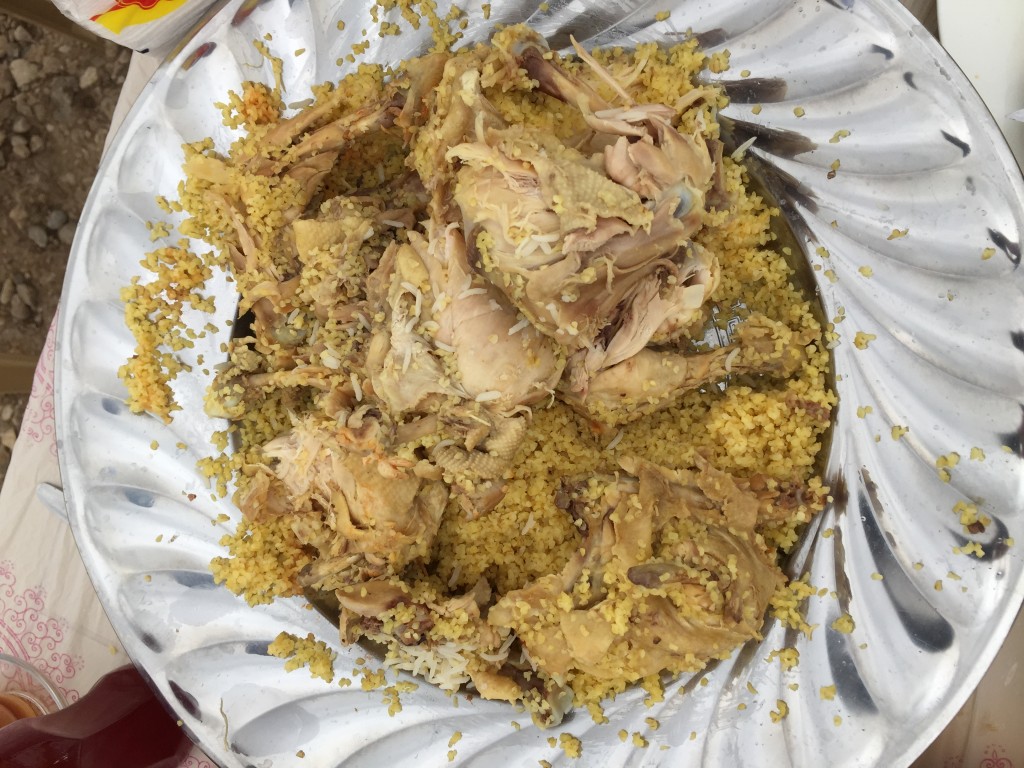 A manic mix of men’s hands and serving spoons dived into the large plates of Chicken short rice. Dishes of tomatoes and cooked onions in a tomato soup alternated with plates of green capsicums, cucumbers and raw Onion. 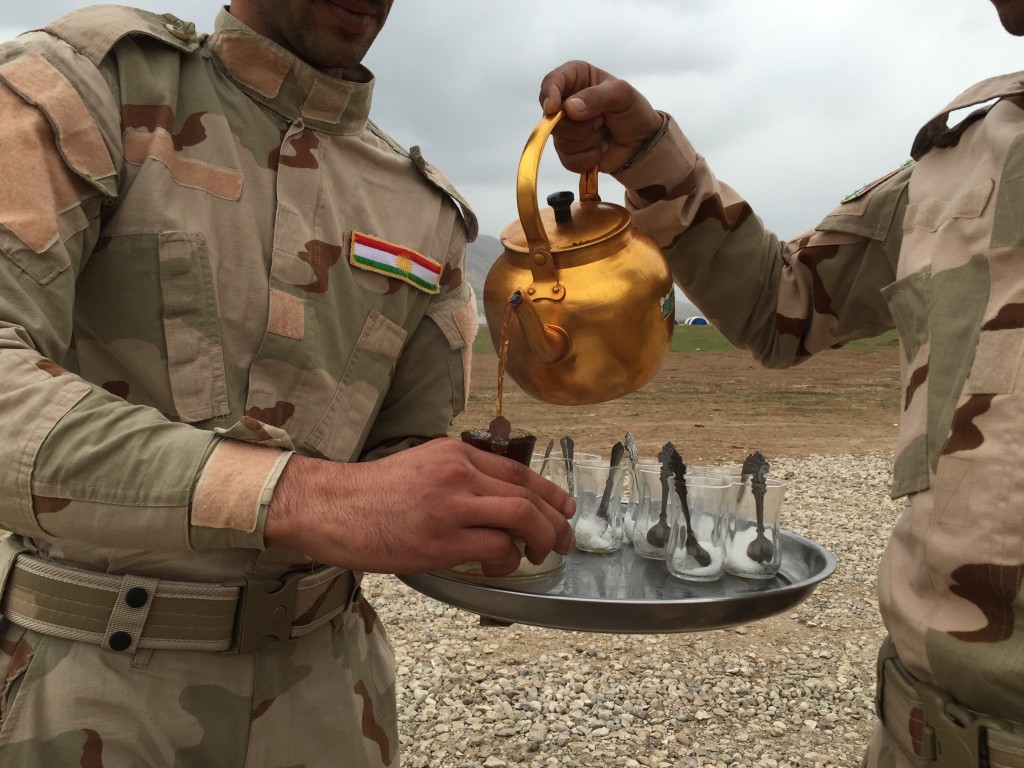 Two young soldiers brought around the golden teapot to serve hot tea to us. Tea only comes one way, in Northern Iraq: strong, sweet and full to the brim, enough to revive any tired cameraman.

Lunch was quite furious down my end of the table, and lasted only as long as the Governor stayed eating and drinking.  The moment he stood, we all stood and stopped eating too. The plates were quickly cleared, and leftovers combined, to serve the next round of people whose turn it now was to eat. 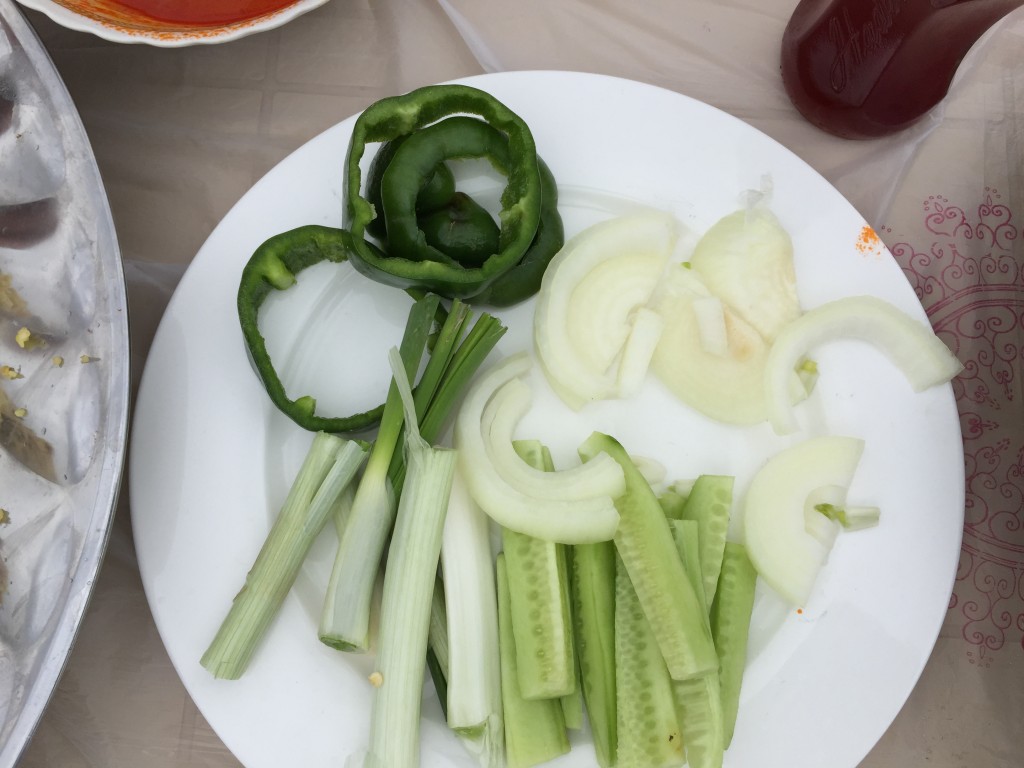 We were the lucky ones, the guests of honour, who got to dine first and eat the choicest pieces of meat. For our dining companions, it’s going to be a tough and tiring battle, and they will need all the training and nutrients they can manage.

Scott Munro is a London based freelance Lighting Cameraman who, occasionally, gets to eat lunch on the road. www.Lightworks.tv 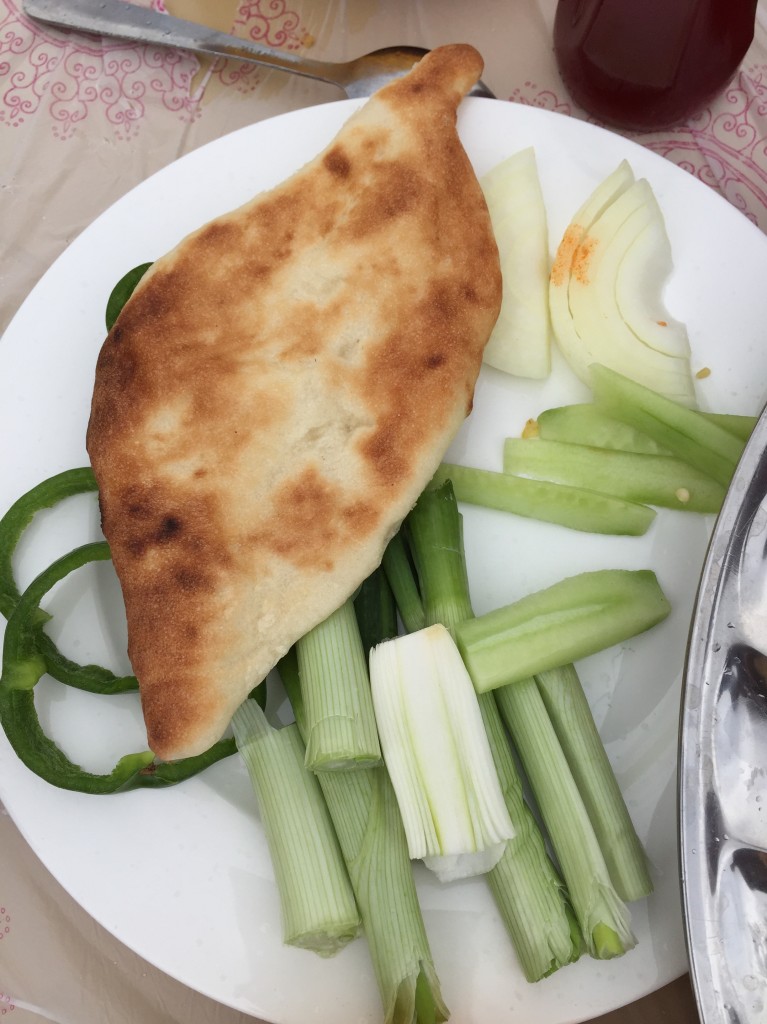 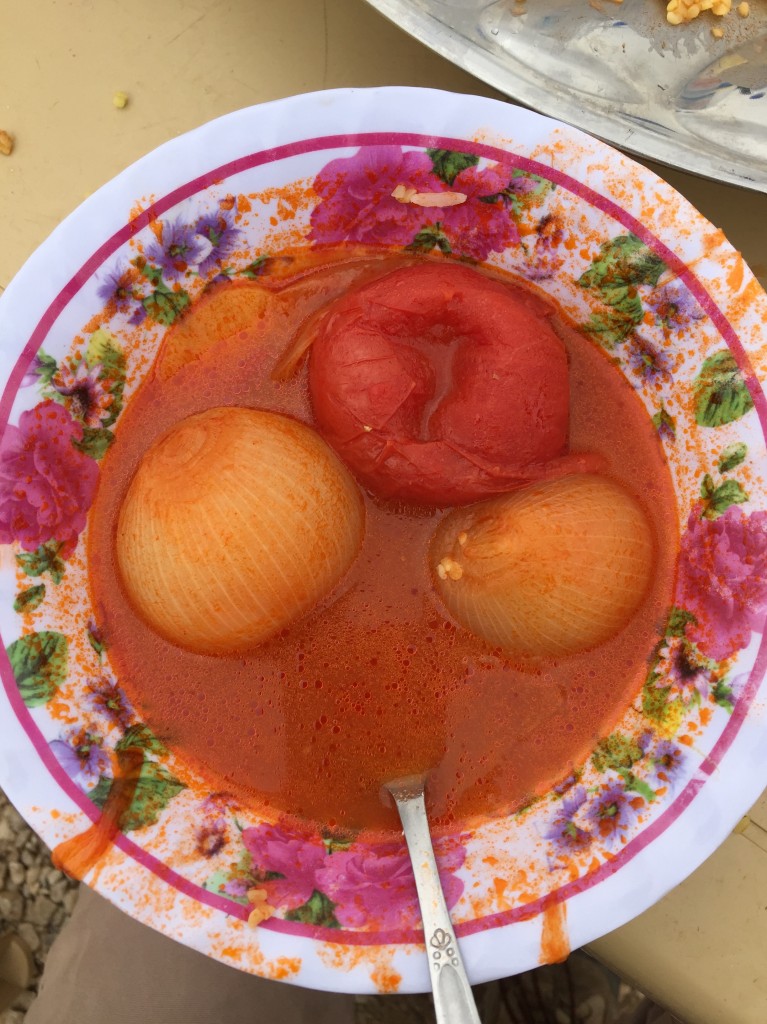 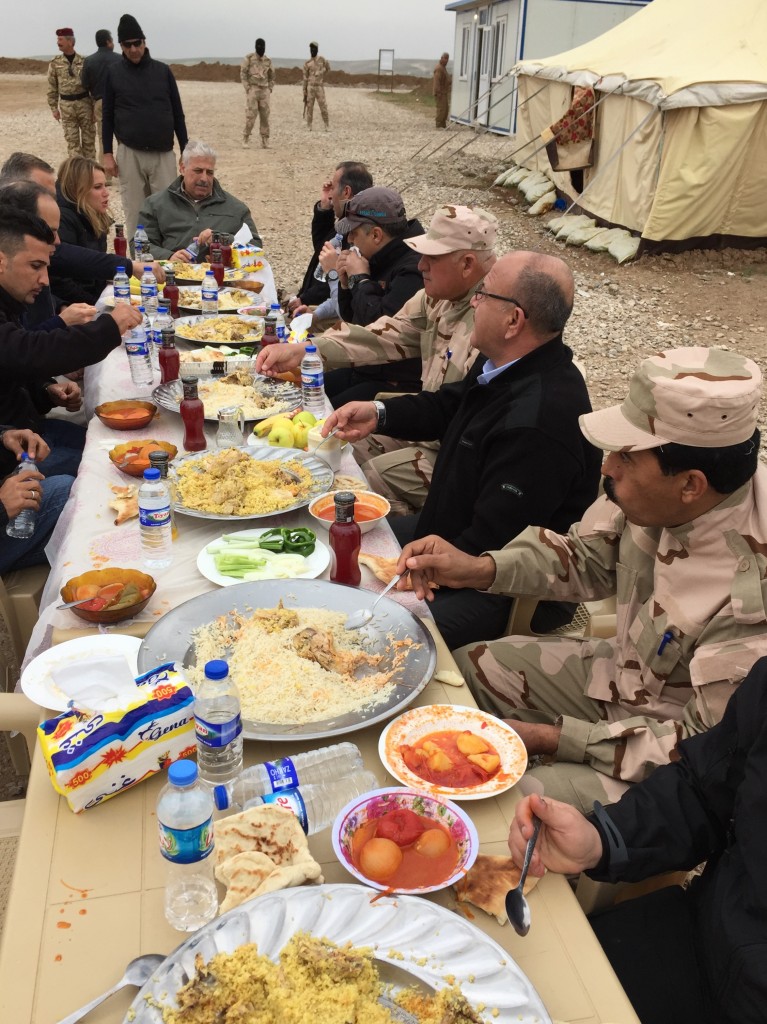 View all posts by Scott Munro →