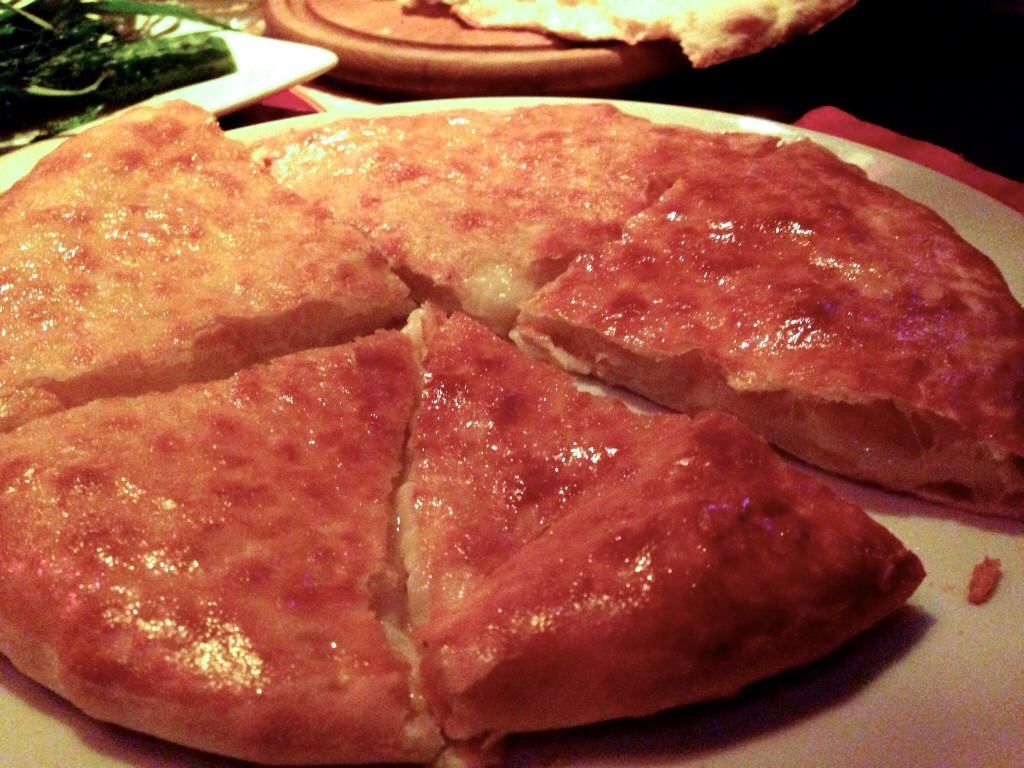 I wasn’t really familiar with Georgian cuisine – or so I thought. But after we ordered the bulk of the menu at Borjomi, a Georgian restaurant in downtown Donetsk, I realized I’d seen all these things before, in various incarnations in other countries.  While everything was new – and in Russian – it was all, somehow, familiar.

Cheese-filled bread? Check. Here, they call it khachapuri, served three ways at Borjomi: plain cheese, cheese topped with egg, and cheese with meat. Chewy, salty, with a light crust on the outside, it’s exactly what you want at the end of a long, difficult day. It’s an edible hug. 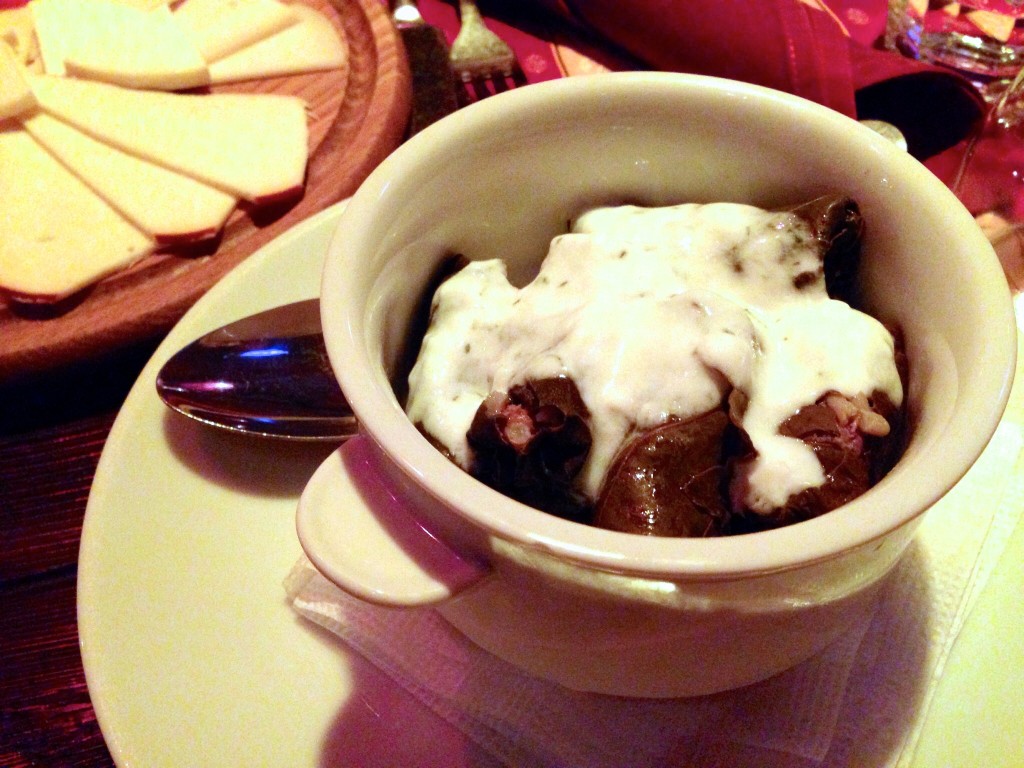 Stuffed grapeleaves? Double check. Also called dolma in Georgia (as they are in Greece), these grape leaves are filled with a flavorful rice/meat mixture and topped with a tangy yogurt sauce that was good enough to lick from the bottom of the bowl. Normally I can take a pass on stuffed grape leaves – they’re often overly-citrused, dense, and sometimes cold. Not these. They were lighter than usual, warm, and packed a lot of flavor in a small package.

The shashlik platter of mixed, grilled meat, was well-seasoned and tender: perfect bites of lamb at the end of a long splinter of bone; medallions of marinated chicken; a couple of buttery pork chops and beef medallions that tasted of salt, seasoning, and fire. We paired the proteins with a disc of oven-baked bread, a platter of raw crudités and herbs, and a trio of sauces that included a Georgian salsa and a beautifully dark cherry chutney. 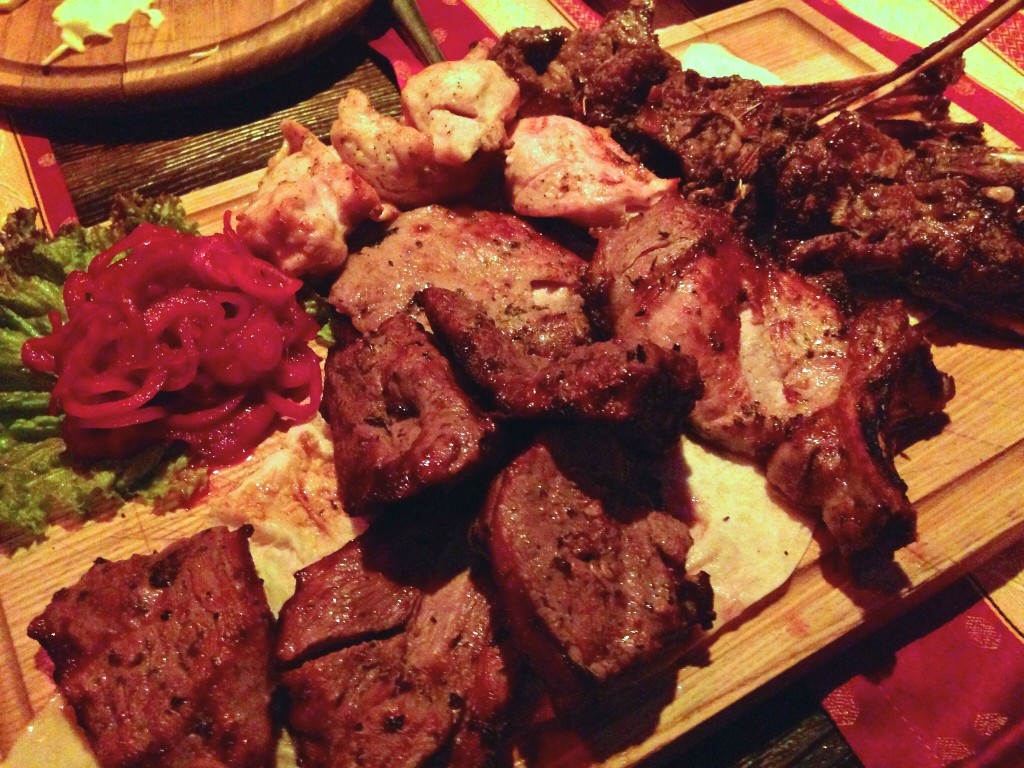 The menu, at over 8 pages, is a bit overwhelming – but the waitresses here are happy to help, and leave you with a little red buzzer that will summon them when needed. (And after weeks of desperately waving your hands in Donetsk in the hopes of getting a check, this is no small perk.)

Sometimes you want a restaurant to push the envelope, show you something new. And sometimes you just want to be fed well, treated well, and walk away full and satisfied. On those nights, Borjomi is your place.

Also, you can order vodka by the flask. Just in case you need your culinary hug to be accompanied by a kick in the pants. 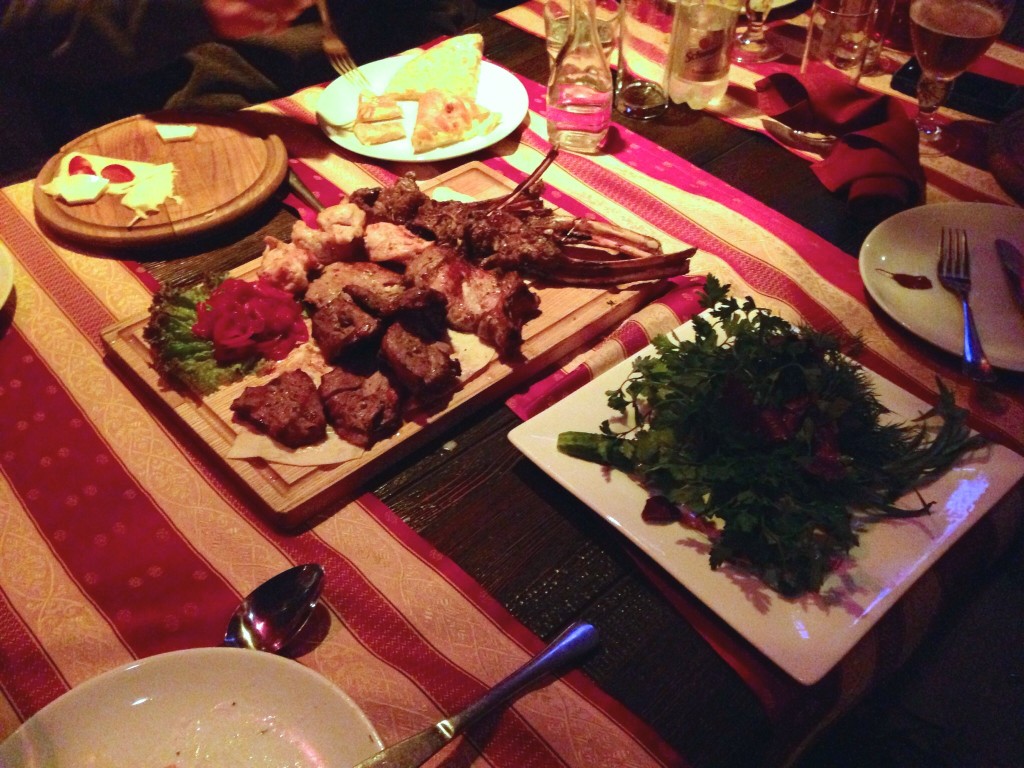