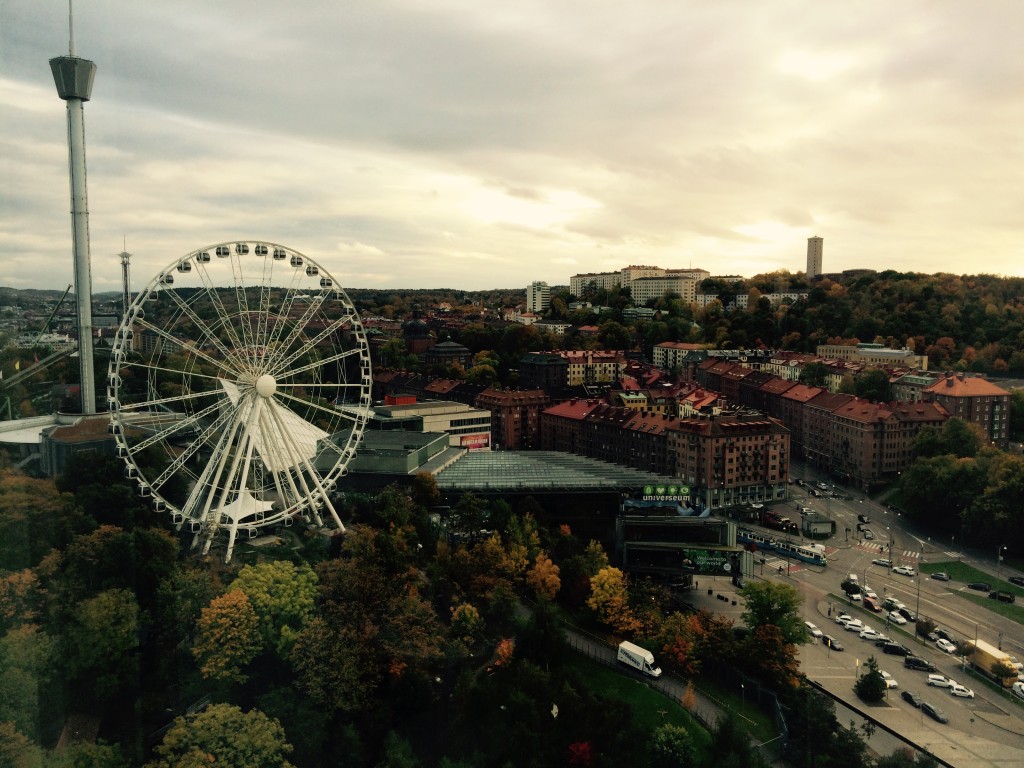 Gothenburg, Sweden, is one of these Scandi towns on the cutting edge of New Nordic cuisine. Tasting menus abound, and Michelin stars are scattered about this coastal city like snowflakes. But for those of us without the time or the budget (and when working on deadline, who does have those things?) for a seven-course extravaganza of seaferns and pickled mussels and smoked hay… Bord27 is the place to be. 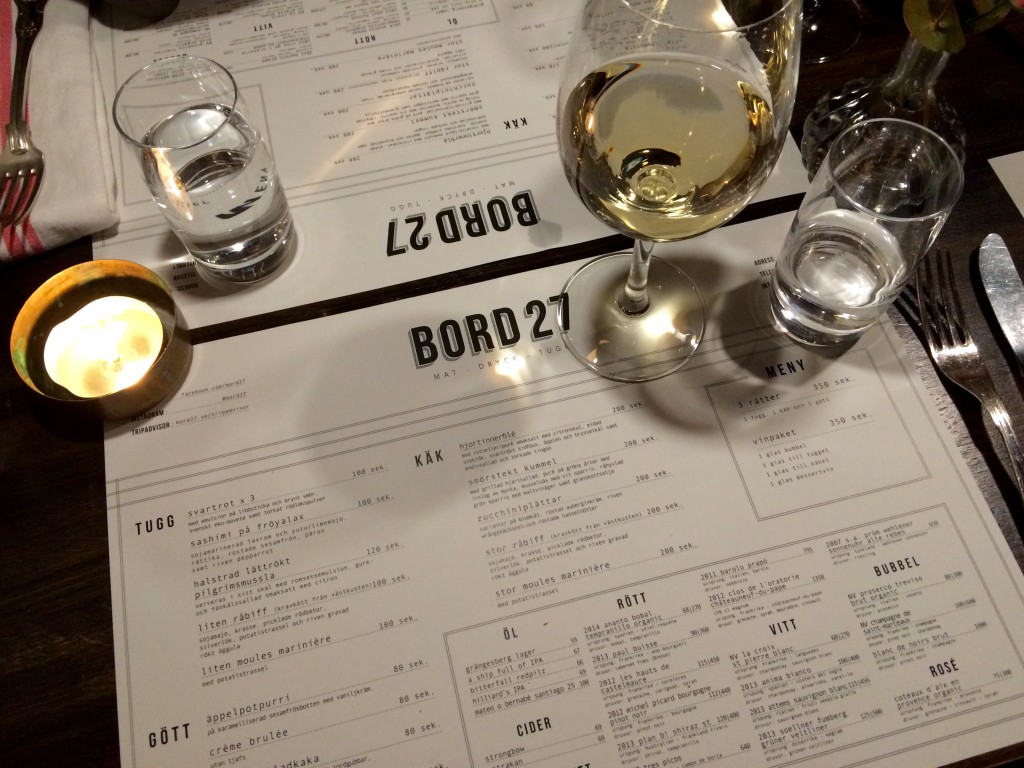 The restaurant, with all-wood & leather interiors bathed in the cozy light of bare filament bulbs, is only 7-months old. The menu is simple, local, and changes weekly — with enough choices to keep you interested, but not enough to overwhelm. There’s no English menu, and there were only local diners, but the lumberjack waiters (plaid shirts, leather aprons, man-buns) talked us through the options and made suggestions when asked. A three course meal is less than $50. 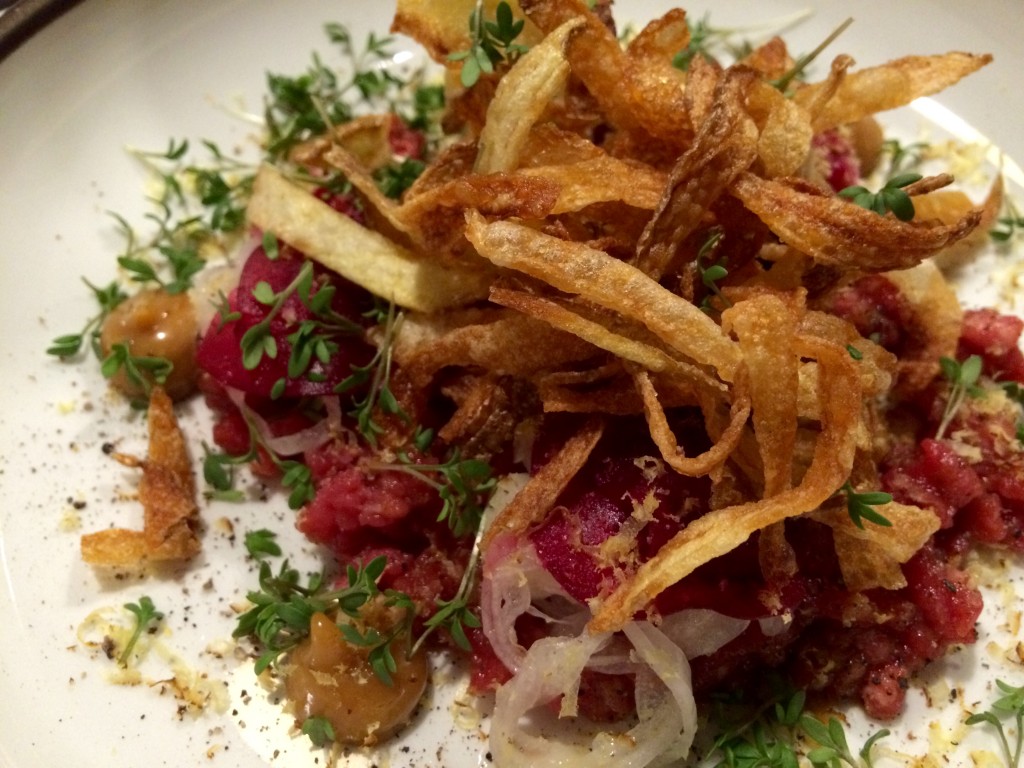 To start — the beef tartare, Swedish-style. Coarsely chopped steak filet, both soft and toothsome, tossed with watercress, white onion and pickled beets, topped with fried potato crisps and served with potato jam and grated smoked egg yolk. One of the most amazing tartares I’ve ever had, hitting every umami note and every texture in every bite. It’s also an option as a large main course — but the appetizer-size is more than enough.  Complimentary seed crisps and homemade butter are served alongside. Helpful lumberjack waiter even brought out a “surfer” – small draft beer served in a wine glass – as he deemed white wine a bad pairing for the food. 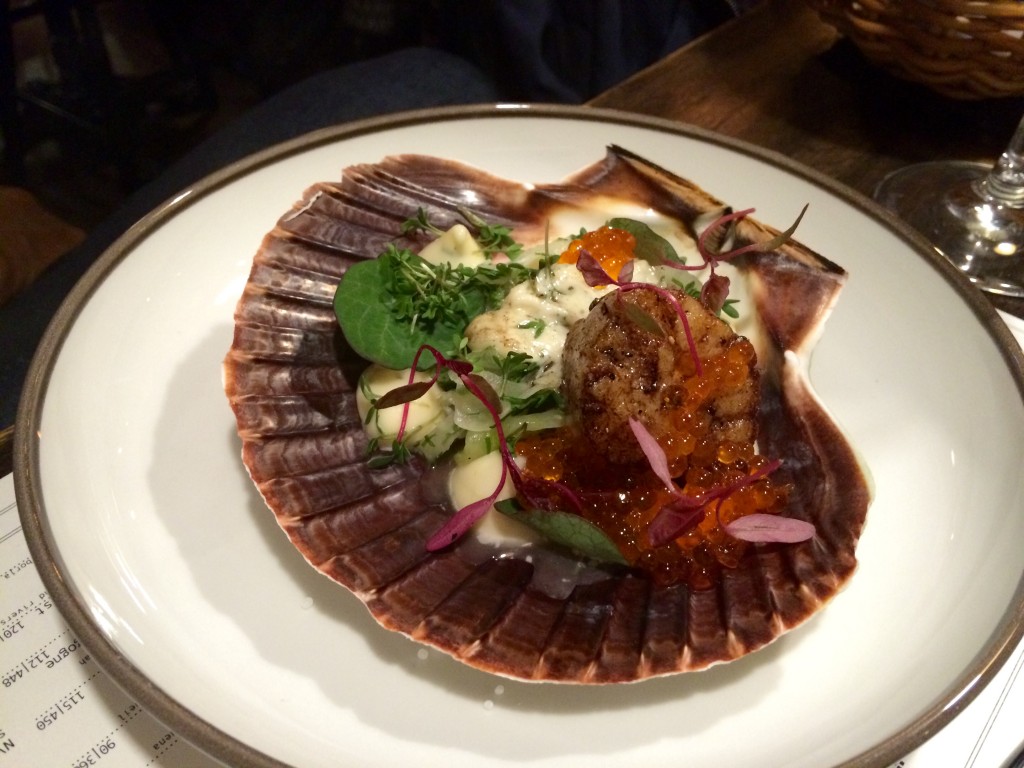 The pilgrimsmussla (scallop) was a weekly special, harvested locally, grilled and served in its shell with fennel and cucumber salad, lemon emulsion and fish roe. A beautiful plate, with the hot sear on the scallop tempered by the creamy chill of the salad, but perhaps a bit small compared to the tartare. Other appetizer options included mussels marinere, a sashimi plate of local fish, and root vegetables served with browned butter and buckwheat. 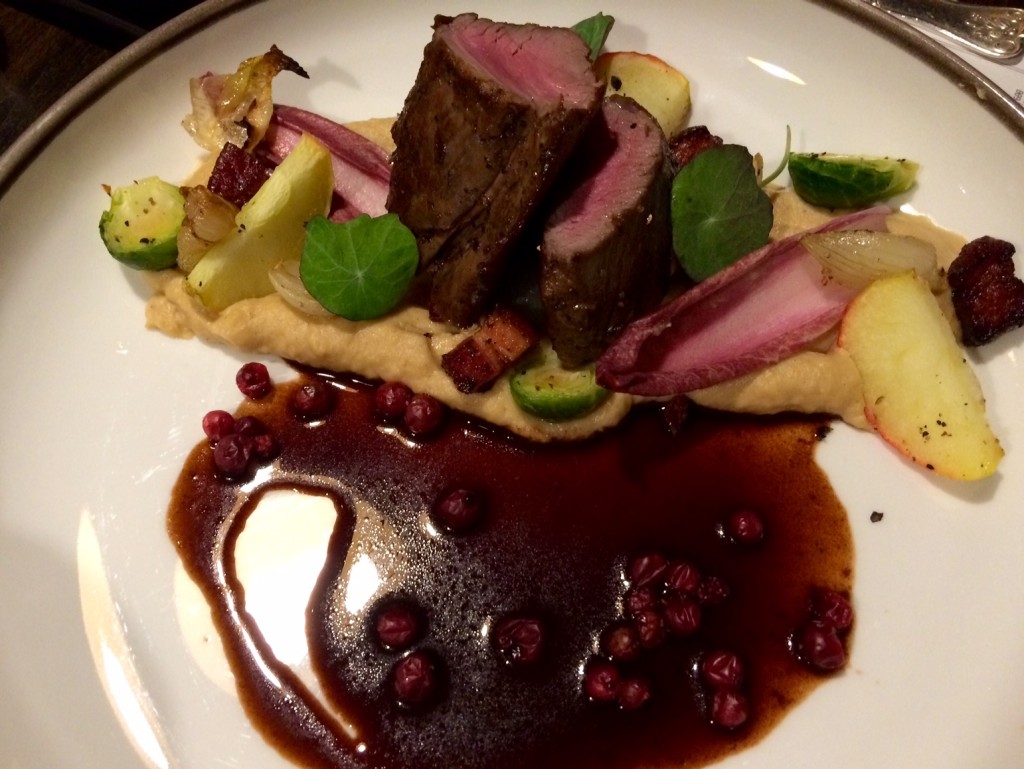 For the main course, this time of year, there’s deer. Here it’s a grilled tenderloin atop celeriac puree, accompanied by roast apples, brussels spouts and bacon. This being Sweden, the whole shebang is served with a dark, funky lingonberry sauce. 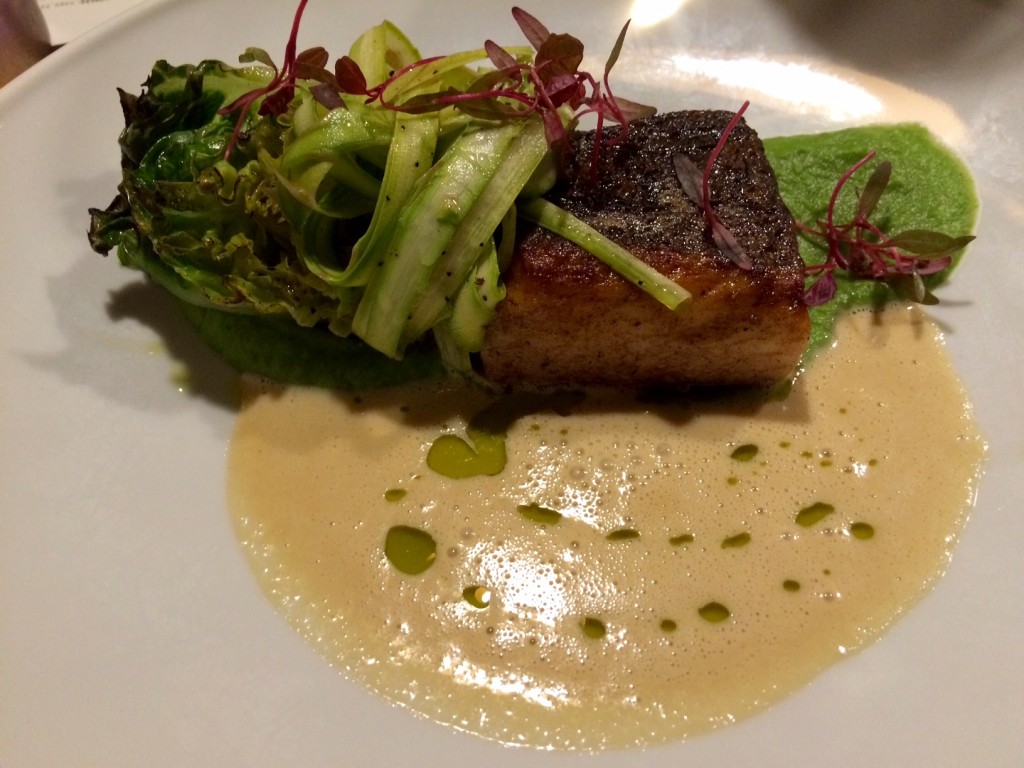 The other seasonal specialty was hake, a fish plucked from waters just beyond the port. Seared perfectly, with a crispy skin and juicy exterior, the hake came with grilled romaine salad, grean pea puree, shaved asparagus, and a clam/white asparagus/mint sauce that was as rich as a butter bath. The mains were filling without overdoing it — and left us enough room for dessert. (For vegetarians in the crowd, there was also a dish of zucchini and eggplant on offer.) 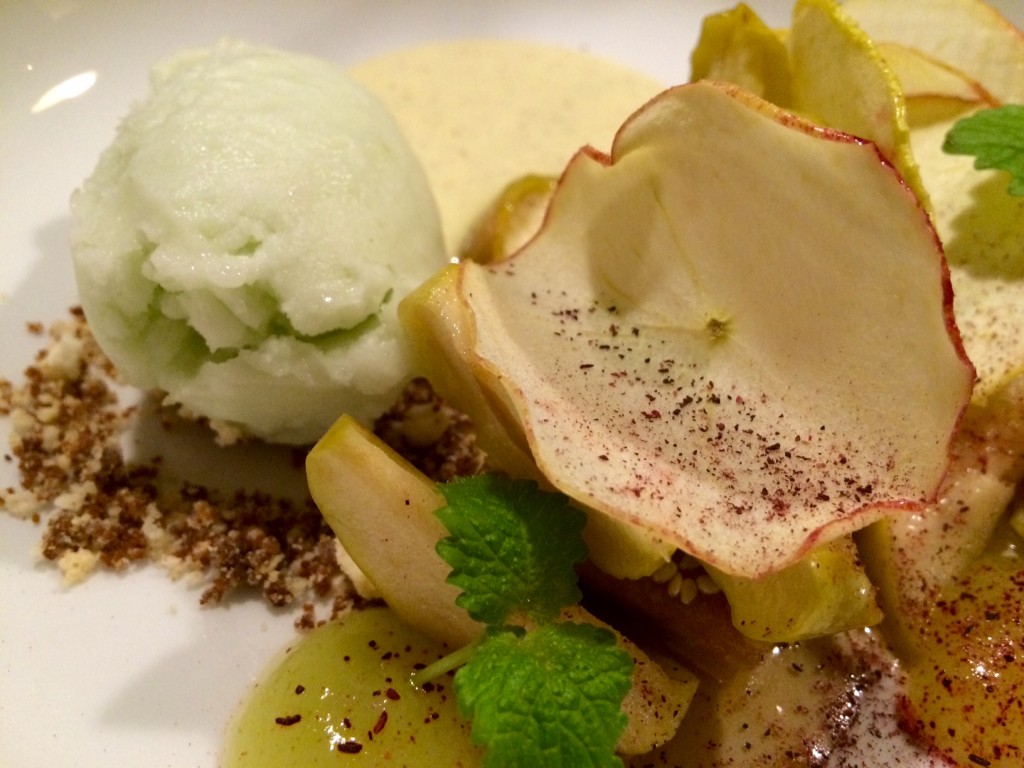 There are only three desserts, plus a cheese plate, so thankfully we didn’t even need to make a choice. One of each, garcon lumberjack! (I suppose that would be skogshuggare servitor! in Gothenburg-ese).  They were a sliding scale of decadence. On one end, the bright and acidic “apple potpourri” of a caramelized apple-sesame bar, vanilla cream, apple sorbet, and apple done a gazillion different ways (dried apple, roast apple, apple sauce, grated apple). 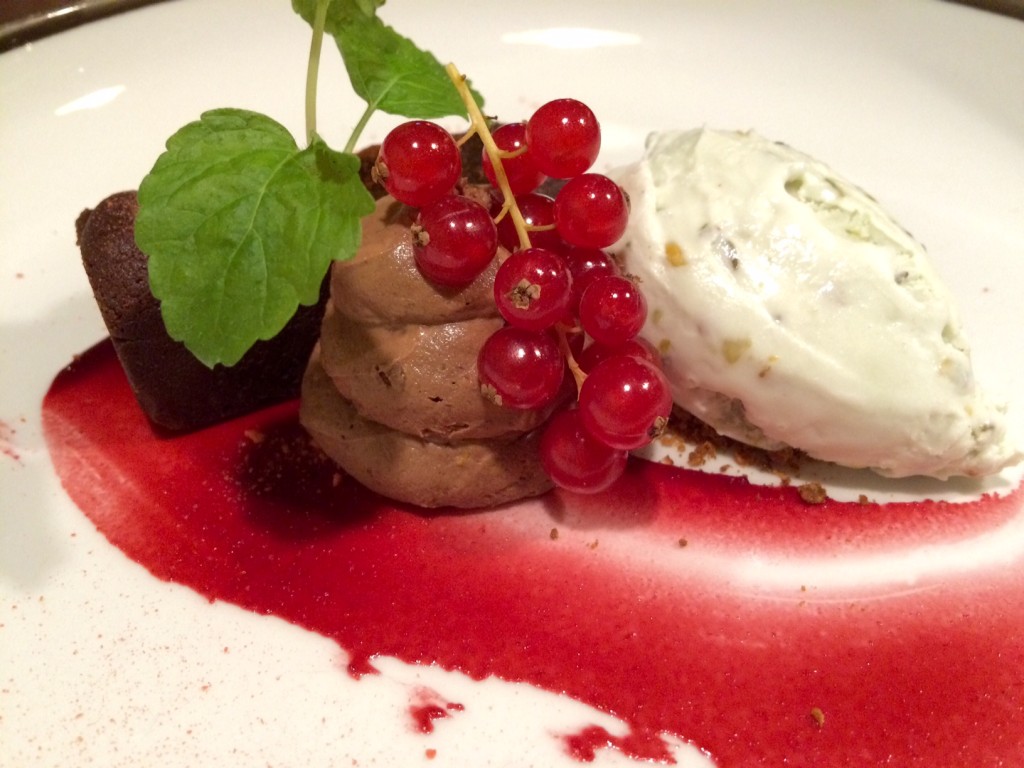 All in all it felt like dining in your hip lumberjack buddy’s wine bar. Elevated, fabulous new Nordic cooking… at prices closer to sea-level. 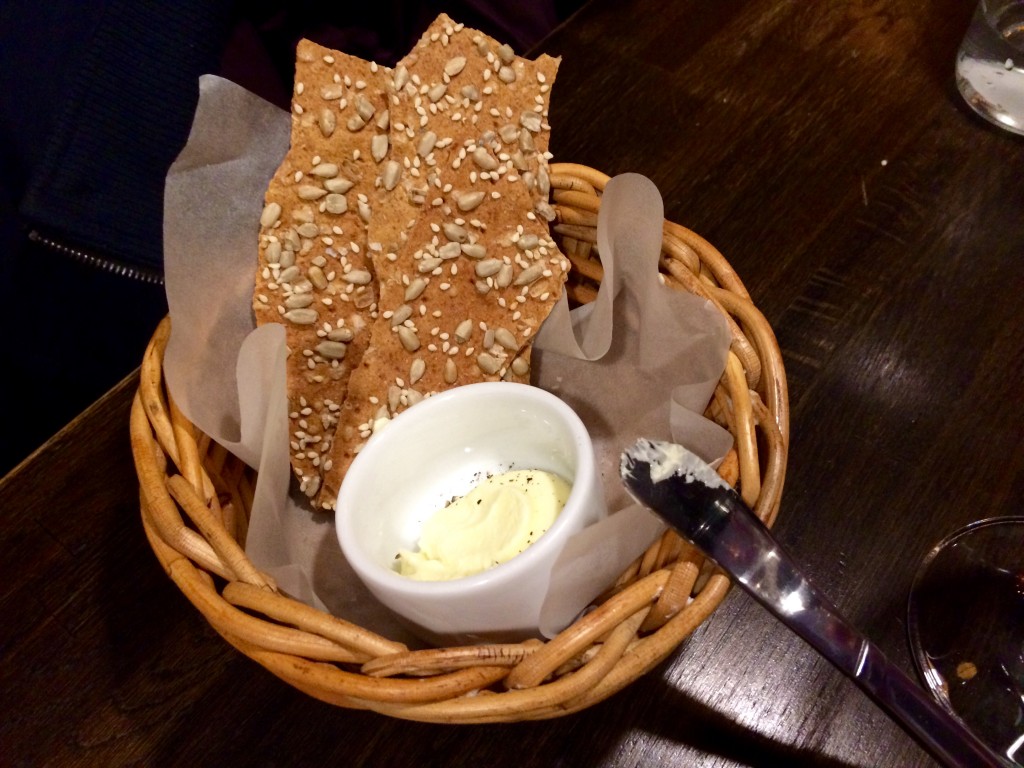