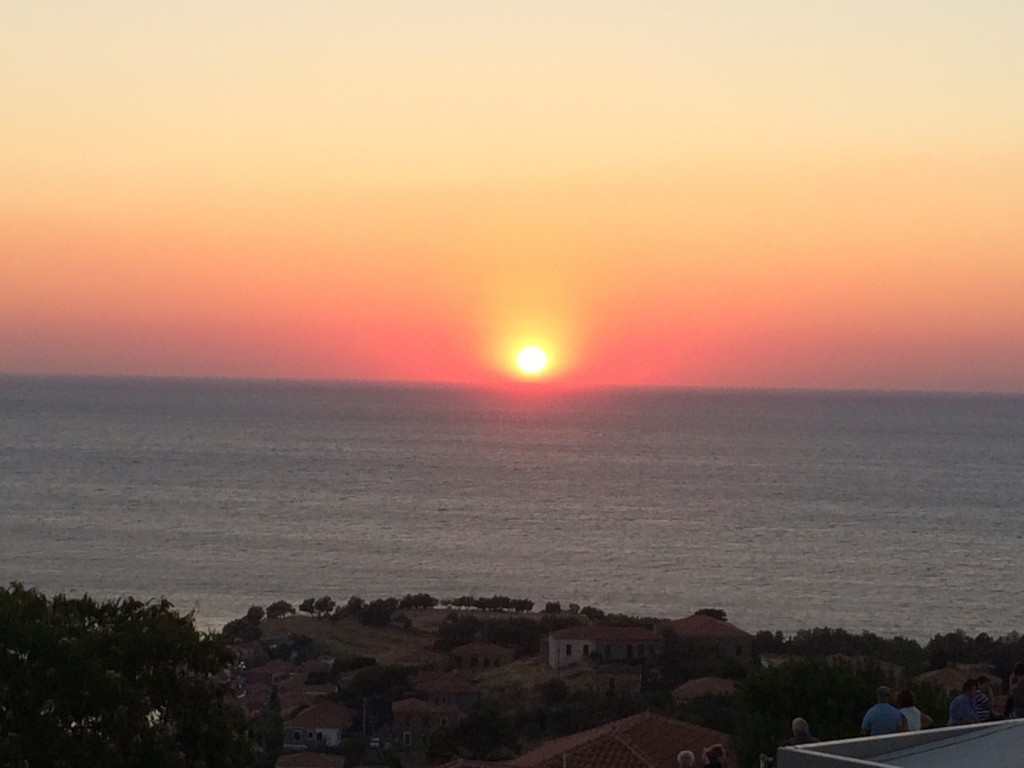 It has been a tough year for Greece. Economic crises, political drama, and just as tourist season began — the one bright financial light for many islanders — a refugee problem of biblical proportions. Every day on the island of Lesvos, rubber rafts careen onto its shores, stuffed to the brim with refugees from Syria and Iraq. They board in Turkey after paying smugglers for the life vest and the spot in the boat (one can hardly call it a ‘seat’) and cross the Aegean in about 90 minutes. They land with overwhelming relief and joy, exuberant to finally be in Europe. But their hard journey to a permanent place is only beginning. 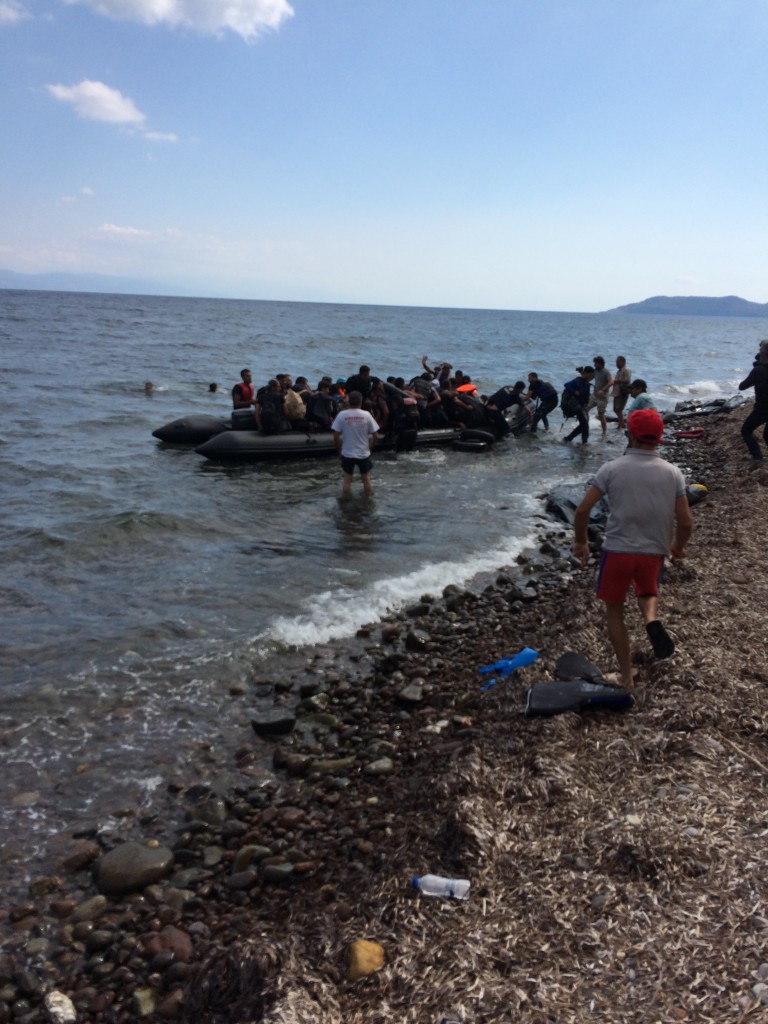 In the middle of this exodus/influx are the Greek people, looking bewildered around their tiny tourist villages as they swell with tent-dwellers and families looking for a place to charge phones and wash their faces. Tourism is down. Stress is up. And everyone tries to make do.

The cooking in Lesvos is simple and fresh: the Ottomans used to call the island “the orchard of the Empire”. Almost everything you’ll eat is grown locally, and many restaurants run their own gardens or farms to provide their ingredients. 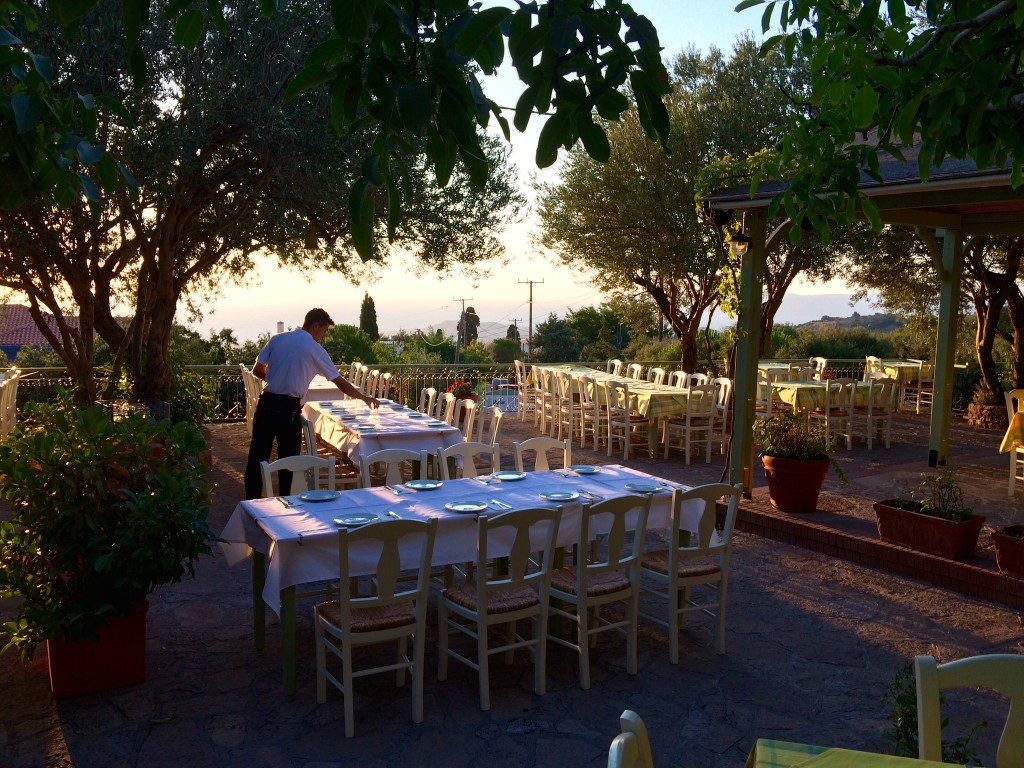 One of the lovelier options near the village of Molyvos is Vafios Taverna, perched a few kilometers up a mountain with a stunning vista of sea, sun and rolling hills. Sunset in the dappled light of olive trees on the wide patio makes you feel so very far away; music, dancing, and the presence of a few tabby cats make you sure you’re in Greece. 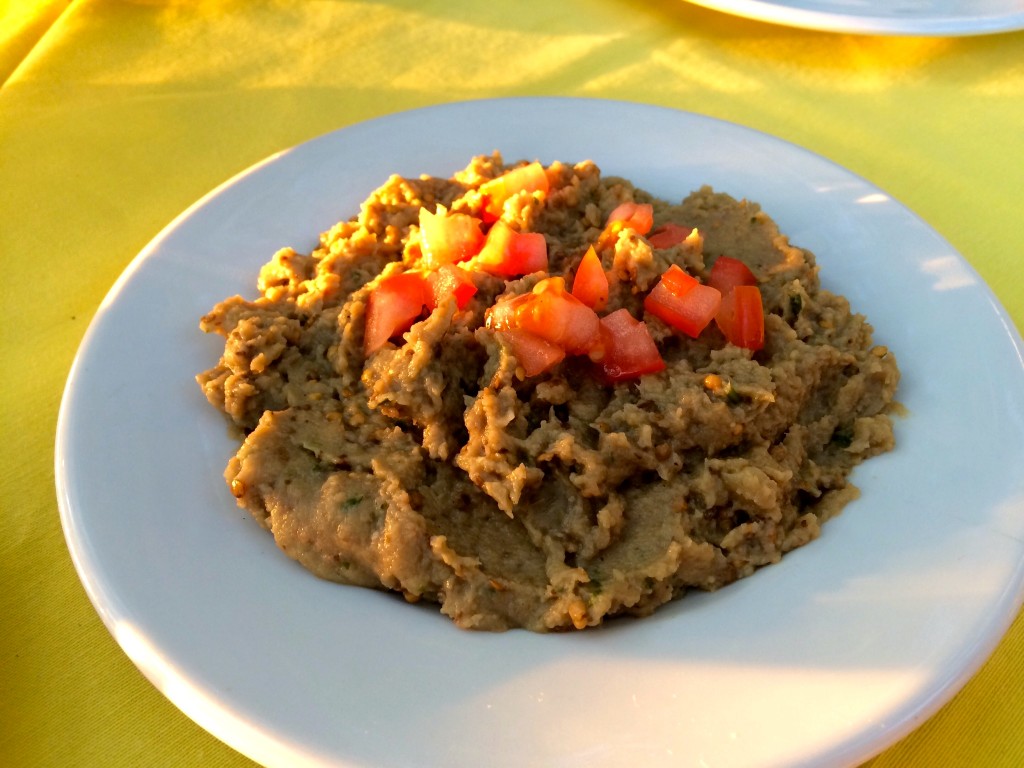 As in all tavernas, start your meal with a selection of mezze (small plates). We went with a wonderfully thick tzatziki (yogurt, garlic & cucumber) and a taramasalata (fish roe paste) that was a bit light on the fishiness. A blended eggplant salad wasn’t the most attractive thing on a plate, but it was smoky from the grill and brightened with a hit of lemon juice. 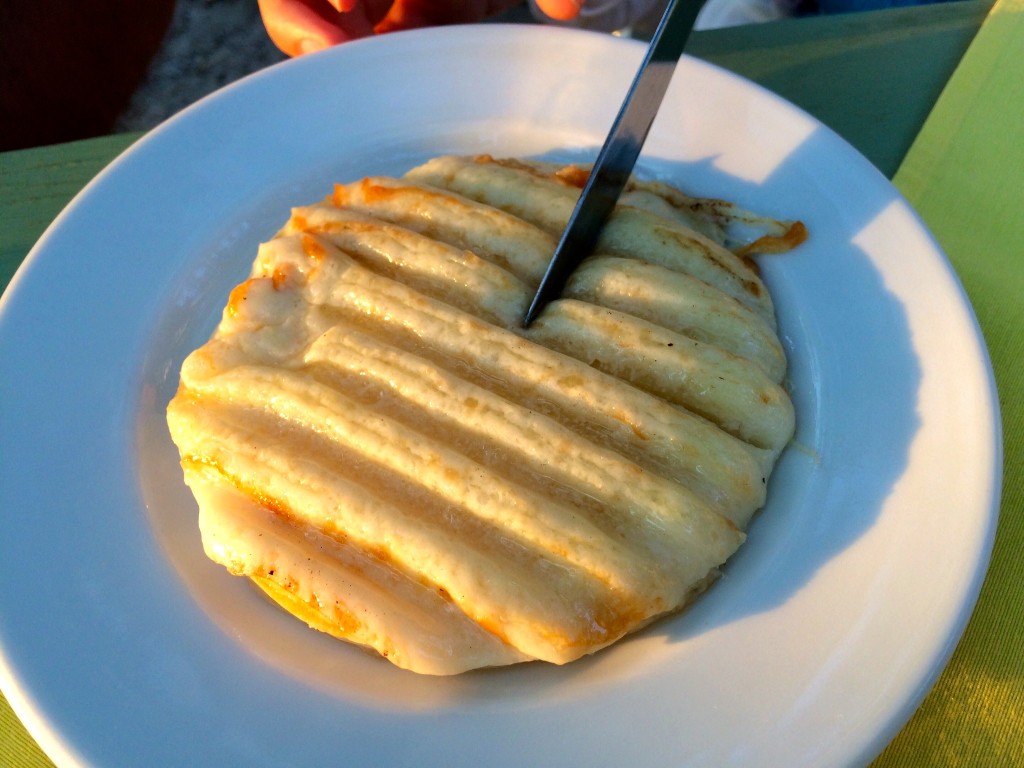 The restaurant serves quite a large selection of cheese including the standard feta and halloumi, but we opted for a grilled local cheese called ladotiri, made of sheeps milk and cured in olive oil. It was toothsome and stronger than halloumi — and is only made on this island. 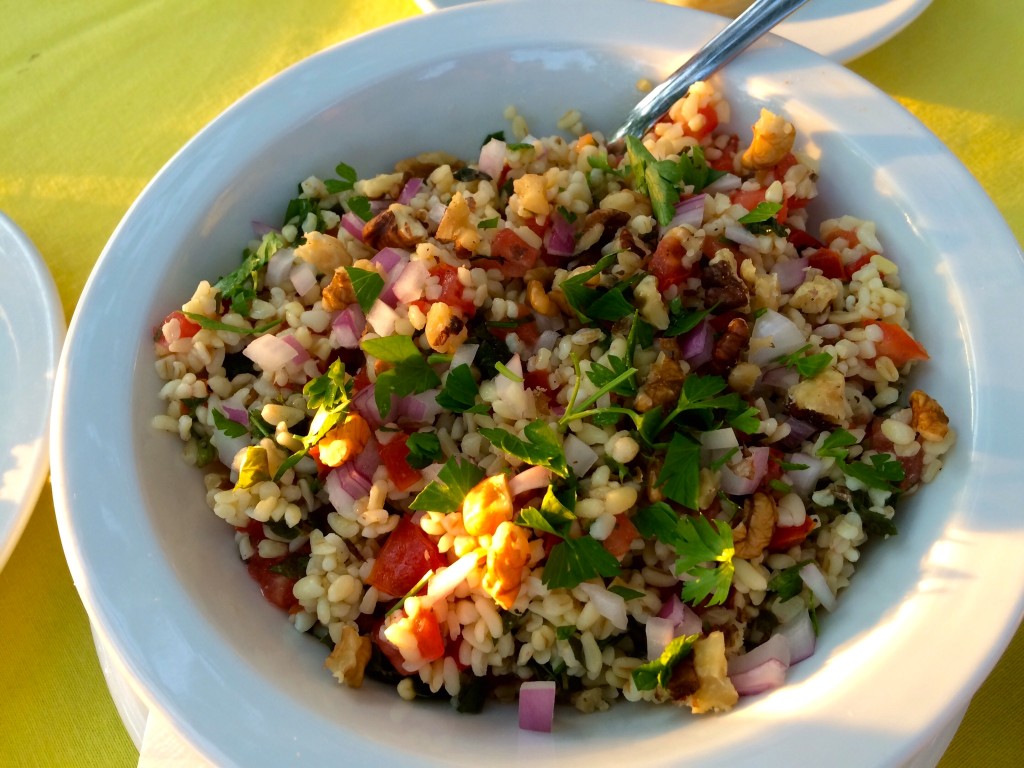 In general the menus at Greek tavernas reach into 4 or 5 pages, with a hundred options — and Vafios is no exception. I could eat there every night for a week and not order the same thing twice. Since I ate my weight in Greek salads the last time I was in Athens, I went for a bulgur wheat option this time (called Grandmother’s salad), mixed with parsley, walnuts, tomatoes and red onion — and it was perfect. Had I topped it with some grilled shrimp it would absolutely not been out of place in Los Angeles. 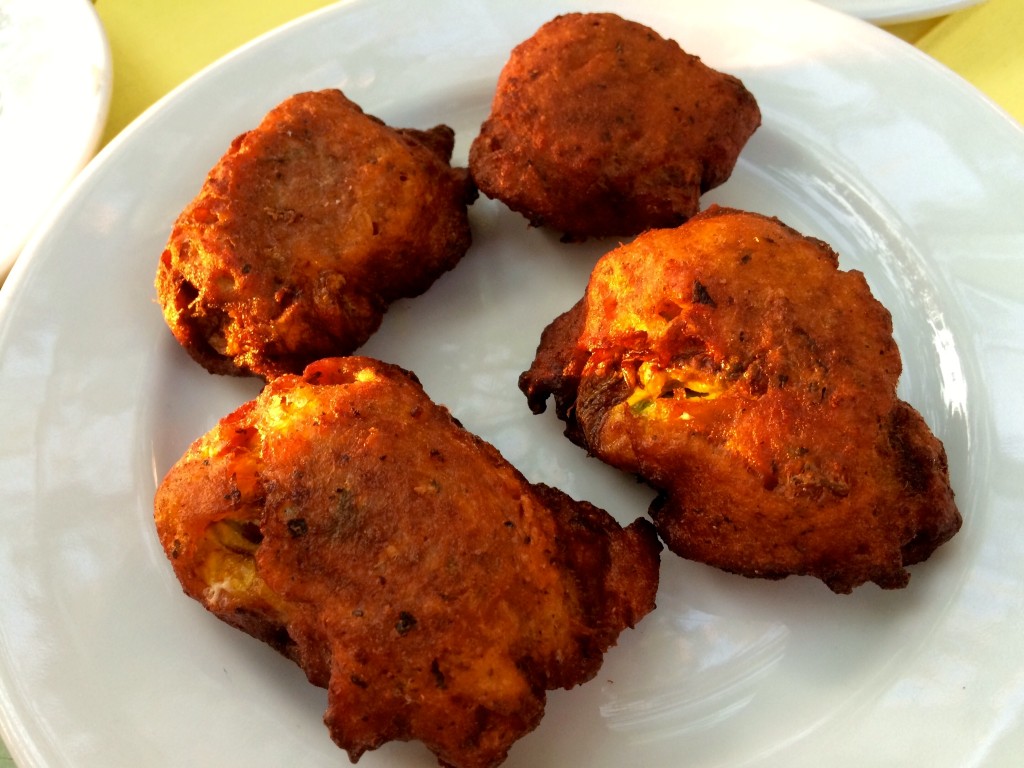 Clearly, Lesvos has a thing for zucchini flowers – the menu listed at least 5 different versions of them: stuffed with rice, stuffed with cheese, stuffed with meat, topped with sauce, fried, steamed… whatever you could do to a zucchini flower, they did. The Vafios flowers, which we ordered, were slightly spicy and stuffed with an oozy, salty cheese. Onion fritters and fried cheese pie had nothing on these suckers. 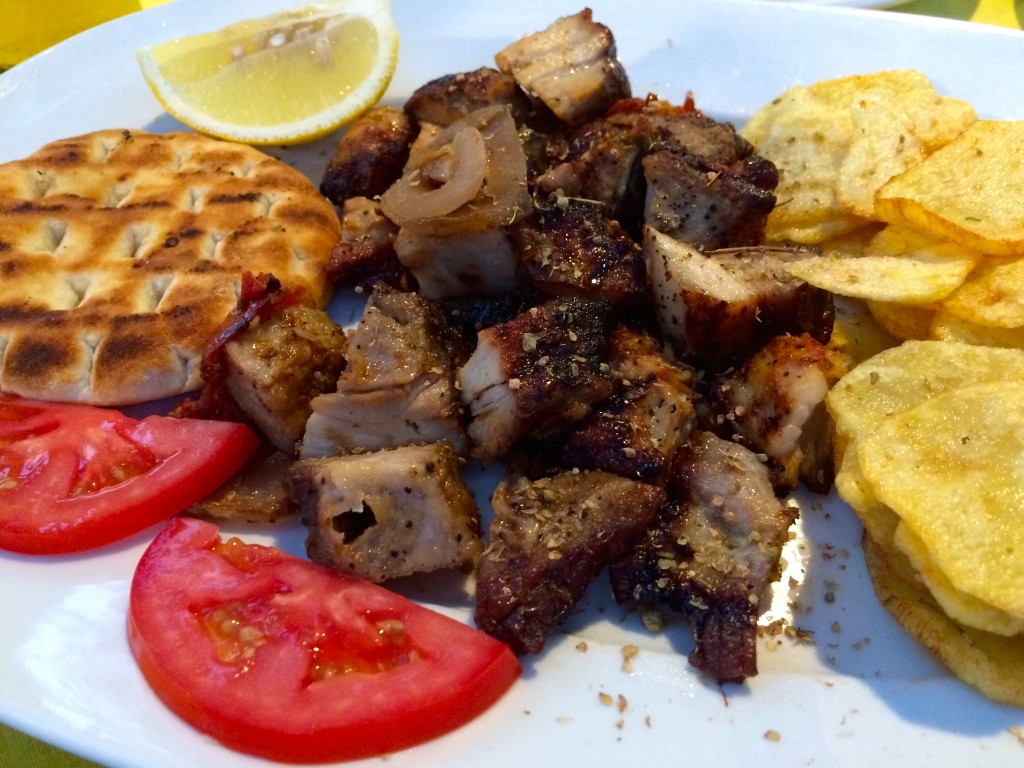 On the meat end of things, Vafios does a killer grilled lamb, a local rooster cooked in wine, mixed grills, kebabs, and pork. We ordered the kontosouvli, spit-roasted pork marinated in grated onions. It veered a little salty, but was juicy and tender, served with grilled pita and fried potato slices. 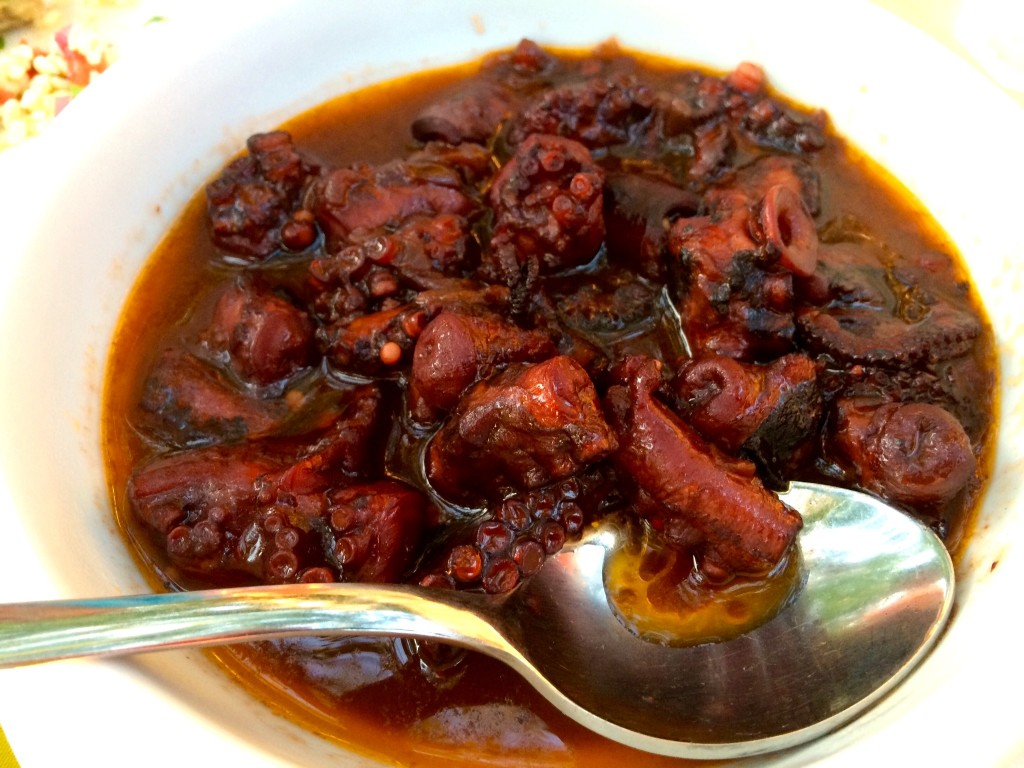 Bizarrely, though Vafios is only a 10 minute drive from the water, the menu is surprisingly devoid of seafood. There were only two options – an expensive grilled fish, and octopus in red wine sauce. It was nicely cooked – tender enough, and the sauce was tangy and pleasant – but it lacked the char you really look for in a good tentacle. (That is, if you’re me, who actively looks for charred tenticles.) 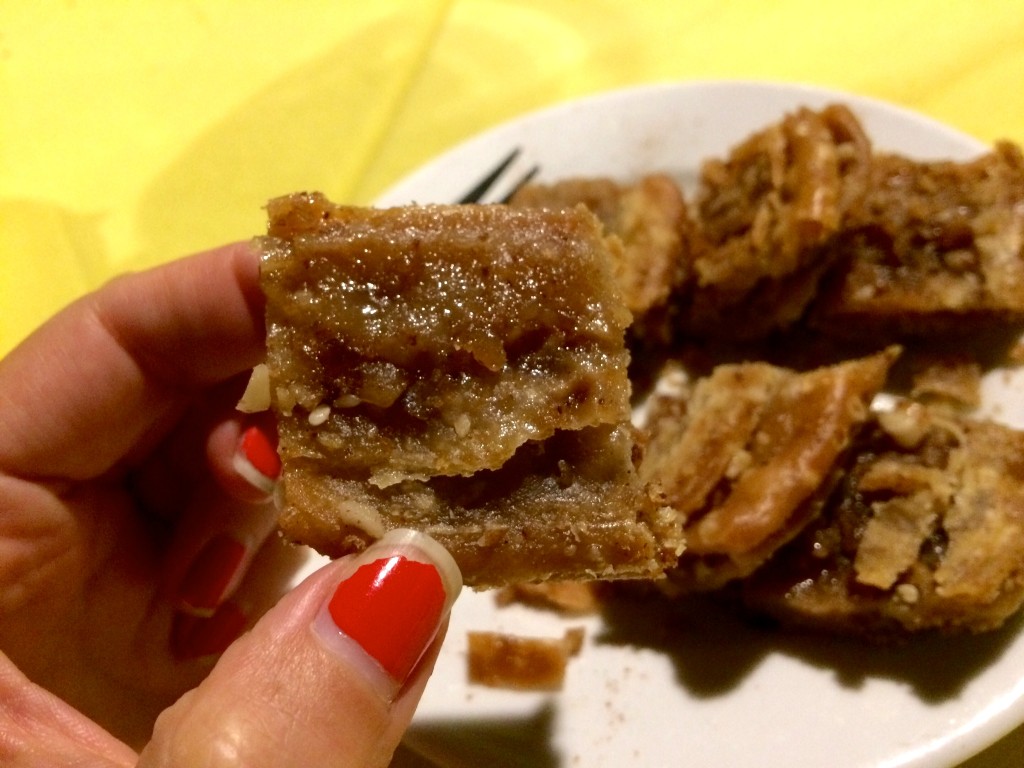 Dessert is a bit lackluster — banana ice cream? who orders that? – but I decided to try a local dessert called platzeda, described by the waiter as baklava made with nutmeg. Frankly, you could cover cardboard in honey and nuts and cinnamon and I would happily slurp it up, and this was no exception. It was a sweet way to end the meal, but we didn’t clear the plate. Honestly, we couldn’t. We rolled out of there, stuffed to the gills with cheese, garlic, pork and vegetables.

All the recipes are from the owner’s grandmother. She would have been proud of the weight we packed on in those few hours of respite above the shoreline. But these days, that kind of eating, in that village, doesn’t come without a side of guilt. Never has the distance between the have’s and the have-not’s been so wide, and so stark.

A Battle for Gentrification: A. Cooke Pie & Eel Closes For Good
Snacks along the Railroad Tracks in Hungary

One Response to On a Greek Island, Catering to Tourists while Refugees Abound